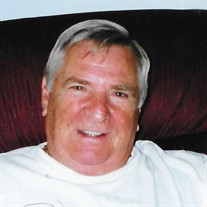 Fitchburg- Nicholas Carfagna, 88, of Fitchburg, died Wednesday, July 18, 2018, at Health Alliance- Leominster Hospital following a brief illness. His beloved wife of 66 years, Lorraine J. (LeBlanc) Carfagna died in July 2016. Mr. Carfagna was born in Struthers, Ohio, June 22, 1930, a son of Silverio and Eugenia (Campagiorna) Carfagna and grew up in Ohio. He has resided in Fitchburg for nearly 70 years. During the Korean War, Nick served his country in the United States Army, 7th Infantry Regiment, 10th Field Artillery. Following his discharge from the armed services, he went to work for the James River Paper Company in Fitchburg. After his retirement from the company, he worked both as an attendant at a local gas station and as a bartender at the Rendezvous Restaurant where his warm personality was truly appreciated. Nick was always active in sports beginning long ago as a high school quarterback. His love of sports continued throughout his life both in participating and coaching. He was an avid golfer and a longtime member of Monoosnock Country Club in Leominster. He was also a member of St. Joseph’s Parish in Fitchburg. Nick worked as a mason with his father-in-law, installing the beautiful circular stained glass window during the construction of the addition to St. Joseph Church. He was a member of the American Legion Post #151 in Leominster and was also a frequent visitor to the Fitchburg Senior Center. He leaves his daughter and son-in-law, Gale A. and Deacon David R. Isabelle of Fitchburg; a grandson, Dr. Aaron D. Isabelle and his wife, Kristen; a granddaughter, Carly Marguerite Isabelle (his little beauty) of New York ; two brothers, Clement Carfagna of Douglassville, Ohio, Peter Carfagna of Youngstown, Ohio and a sister, Mary Kanotz of Youngstown, Ohio. Nick was the brother of the late Albert Carfagna and Joseph Carfagna both of Ohio. Nick’s family hopes that he will always be remembered for his love of God, devotion to family and friends, pride as a veteran, love of his Italian heritage, gift of an easy smile and deep appreciation for all who helped make his later years happy. Much love and thanks are extended by the family to the staff of GVNA adult daycare at Parkhill Plaza, The Highlands Rehab staff, Linda Rodriquez, Critical Care Unit Staff of Leominster Hospital, and Beth Terhune all of whom cared for Nick with remarkable dedication, joy and love. Memorial donations may be made to GVNA HealthCare, Inc. 34 Pearly Lane, Gardner, MA 01440, ATTN: GVNA Adult Day Health Services, Parkhill Plaza, Fitchburg. Nick’s private funeral service, with full military honors, was held at the Pieta Chapel with his son-in-law, Deacon David officiating. The Isabelle & Anderson Funeral Home, 316 Clarendon Street, Fitchburg assisted the family with arrangements.

The family of Nicholas Carfagna created this Life Tributes page to make it easy to share your memories.

Send flowers to the Carfagna family.