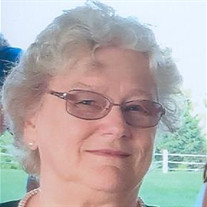 TURNER, ME- Nancy L. (Eisner) Reed, 72, of Turner, ME, formerly of Lunenburg and Medway, died Tuesday, October 15, 2019, at Maine Medical Center in Portland, surrounded by her loving family. Nancy was born in Milford, MA, on March 24, 1947, a daughter of the late Clifford and Marion (Robertson) Eisner. She grew up in Medway, graduating from Medway High School in 1965 and had lived in Lunenburg for several years before moving to Maine in 2014. Nancy was a Technical Editor for Raytheon Corporation in Sudbury for several years prior to her retirement in 2000. Nancy was devoted Mother, Grandmother and Great Grandmother and cherished time spent with her family. She enjoyed sewing, knitting and camping and some of her favorite moments were spent teaching her grandchildren how to cook. She leaves husband, Kenneth A. Reed of Turner, ME; daughter Tracy A. McAvoy of Leominster; step-son Joseph Reed of Thompson, CT; step-daughter Kathi Sterns of Holden; sister Gloria Bryant of Turner, ME; two brothers, Clifford Eisner of Henniker, NH; William Eisner of Townsend, MA; six grandchildren, Michael and Ryan Douglas, Ronald and Nicholas McAvoy, Nathaniel Sterns and Jacob Reed; five great grandchildren Lily, Aaden, Jesse, Brantley and Leah. She was predeceased by her daughter Gwen M. (Douglas) McCormick in 2016. Her funeral will be held on Tuesday, October 22, at 10AM in the Anderson Funeral Home, 25 Fitchburg Rd, Ayer. Burial will be in the South Cemetery in Lunenburg. Calling hours in the funeral home will be held on Monday, October 21, from 4-7 PM. In lieu of flowers memorial contributions may be made to the American Diabetes Association, 260 Cochituate Road, Framingham, MA 01701.

TURNER, ME- Nancy L. (Eisner) Reed, 72, of Turner, ME, formerly of Lunenburg and Medway, died Tuesday, October 15, 2019, at Maine Medical Center in Portland, surrounded by her loving family. Nancy was born in Milford, MA, on March 24, 1947,... View Obituary & Service Information

The family of Nancy L. (Eisner) Reed created this Life Tributes page to make it easy to share your memories.

Send flowers to the Reed family.