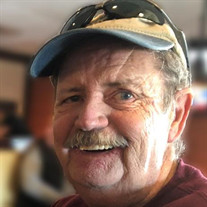 Michael E. Hopkins, 66, of Ashby, died Tuesday, December 10, 2019, in the UMass Medical Center in Worcester. Michael was born in Concord on June 5, 1953, a son of the late George and Joyce (Oldenquist) Hopkins, and grew up in Stow, MA and New Ipswich, NH, graduating from Mascenic Regional High School in 1971, where he was a captain of the basketball team. Michael worked hard to support his family his whole life. He started off with the New Ipswich Highway Department before going to work as a roofer for Seppala & Aho. He then began working as a technician for Oil Recovery Systems in Greenville, NH, where he eventually progressed to operations manager before co-founding a new company, Advanced Remediation Technologies. He later worked for the Lafarge Corporation and most recently drove special needs students for Van Pool before retiring in 2017. In the 1980s he served on the committee that brought cable TV to the town of Ashby, and through his father’s WW II service in the US Navy, he was a member of the Sons of the American Legion in Ashby. He enjoyed raising his three sons, spending time with his family, researching his family tree, tinkering in his barn, spending summers with Joyce at their camp in Wells, Maine, playing horseshoes both at the New Ipswich Athletic Association and at his backyard courts, and being “Pup Pup” to his grandchildren. Michael enjoyed a high quality of life the last 18+ years thanks to his sister Jill’s donation of a kidney to him. He would not have met any of his grandchildren otherwise; Michael and his family will always be grateful. He leaves his wife of 44 years, Joyce A. (Cole) Hopkins of Ashby; three sons and their wives, Seth M. Hopkins and Olya of Brandon, VT, Aaron D. Hopkins and Sara of Ashby, and Adam M. Hopkins and Lisa of Troy, NH; two brothers, Mark Hopkins and Jay Hopkins both of New Ipswich, NH; three sisters, Cynthia Berglind of Acton, Jill Hopkins of New Ipswich, NH and Jan Hopkins of Chatham; seven grandchildren, Mackenzie, Klara, Andrew, Agatha, Ethan, Renata and Sophia, and many nephews and nieces. A celebration of Michael’s life will be held on Monday, December 16, from 4 to 7 PM at the 873 Cafe in Ashby. Burial will take place privately in the Glenwood Cemetery in Ashby. In lieu of flowers memorial contributions may be made to the National Kidney Foundation, www.kidney.org. The T.J. Anderson & Son Funeral Home, 250 Main St. is assisting the family with the funeral arrangements.

Michael E. Hopkins, 66, of Ashby, died Tuesday, December 10, 2019, in the UMass Medical Center in Worcester. Michael was born in Concord on June 5, 1953, a son of the late George and Joyce (Oldenquist) Hopkins, and grew up in Stow, MA and New... View Obituary & Service Information

The family of Michael E. Hopkins created this Life Tributes page to make it easy to share your memories.

Send flowers to the Hopkins family.