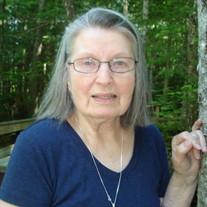 Beloved mother, grandmother, and friend, Mavis Esme (Harris) Boris (Esme) died on December 30, 2020 at the age of 91. She lived her life with kindness, compassion, and a remarkable spirit that endured despite the challenges she faced. Born in 1929 in New Marston, Oxford, England, Esme spent much of her childhood under the shadow of World War II. She attended East Oxford School and later earned a secretarial certificate. After passing the Civil Service exam, Esme held a number of positions in England, including serving in the President's Office of Corpus Christi College, Oxford University. Longing for independence and open spaces, Esme decided to immigrate to America, surviving on cheese-and-pickle sandwiches for a year to save for her passage on the Queen Mary in 1955. Her journey ultimately brought her to Buffalo, New York, where she met her future husband, Thomas Alexander Boris. After moving to Townsend, Massachusetts in 1965, Esme managed a home and raised four children, compensating for limited resources with tremendous love, energy, and self-sacrifice. In the mid-seventies, Esme returned to formal employment as a secretary in the patent department at Foster Grant in Leominster, MA. Some years later, Esme found her true passion (and lifelong friendships) when she joined the team at the LUK (“Let Us Know”) Crisis Center in Fitchburg, MA, a non-profit human services agency. As office manager and administrative assistant, Esme supported the agency’s work however she could, whether by preparing time-critical grant applications or by painting the Center’s lobby on Renovation Day. She continued to assist part-time after her “retirement” in 2002. Esme was sustained by the community of faith that she found as a member of the Townsend Congregational Church, where, in earlier years, she taught Sunday school and served as Deacon. She enjoyed many hobbies. An avid reader, she was drawn particularly to history and to British detective fiction (especially Dorothy L. Sayers). Esme loved music of all kinds: from John Dowland and Giacomo Puccini to Aretha Franklin and Hamilton. She enjoyed gardening as well as knitting, patiently replacing lost mittens for her growing children each year. She also opened her heart and home to generations of much-loved cats, who were devoted to her gentle spirit. Esme lost her husband in 1983; and in 2019 her son, also Thomas A. Boris; and a stepdaughter, Bernice Garibotto. She is survived by three daughters: Sarah A. Boris of Winchendon, MA; Mary A. Harris and husband Brad Harris of Ashburnham, MA; and Carol L. Kunz and husband Larry Kunz of Dunbarton, NH; as well as her late son’s life partner, Estelle James of Townsend, MA; four grandchildren: Katherine Harris, Timothy Harris, Ethan Kunz, and Isabel Kunz; cherished family, including Rosemary Pollard of Moraga, CA; and many dear friends. In lieu of flowers, please consider a donation to one of the following: St. Jude's Children's Research Hospital, The Salvation Army, or Best Friends Animal Society. A service is planned at the Townsend Congregational Church at a later date, to be announced on the Anderson Funeral Home website.

Beloved mother, grandmother, and friend, Mavis Esme (Harris) Boris (Esme) died on December 30, 2020 at the age of 91. She lived her life with kindness, compassion, and a remarkable spirit that endured despite the challenges she faced. Born... View Obituary & Service Information

The family of Mavis Esme (Harris) Boris created this Life Tributes page to make it easy to share your memories.

Send flowers to the Boris family.