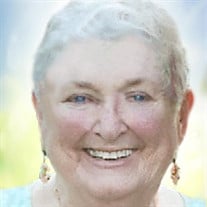 AYER: Maureen T. O’Brien, 83, of Ayer, formerly of Reading, Hingham and Centerville, died Tuesday, January 7, 2020 at her home. Mrs. O’Brien was born in Boston one of eleven children born to Patrick and Charlotta F. (O’Neil) McClearn. Mrs. O’Brien leaves two sons and their wives, Mark J. and Bridget O’Brien of Bradford, Robert A. and Regan O’Brien of Groton; her daughter and son in law, Linda M. and Lee Thompson of Greenville, SC; she was the sister of William McClearn, Thomas McClearn, James McClearn, Lillian D'Entremont, Eileen Pucillo, Frances Clifford, Rosemary Lombard, Kathleen Mathews. Maureen was a very devoted grandmother to 13 grandchildren Shawn, Kevin, Katelyn, Britney, Matthew, Sophie, Grabriel, Willow, Elise, Jonah, Kyle, Benjamin and Colin who all referred to her as "Lovey". She was the mother of the late Matthew J. O’Brien of Hartford who died in 1998. She was also the sister of the late Joseph McClearn and John McClearn. Mrs. O’Brien graduated from St. Elizabeth’s School of Nursing in 1957 and retired from Winchester Hospital in 1982. Maureen went on to earn a Bachelors Degree in 1978 from UMASS Boston in public and community service. She worked 22 years at Central Transportation Planning Staff which did traffic and roadway studies in preparation for such projects as the redesign of Route 128/95 on the north shore and the Big Dig. She eventually was promoted to Deputy Director of Administration and retired in 2000 after 22 years. While a resident of Reading, Mrs. O’Brien served on the Board of Selectman for two terms. Maureen has been a very active member of St. Mary's Parish in Ayer, volunteering in Eucharistic Ministry with the Nashoba Valley Catholic Collaborative. A funeral Mass will be celebrated 11 AM Friday, January 10, 2020 at St. Anthony’s Church, 14 Phoenix Street, Shirley. Burial will be held privately. Mrs. O’Brien’s family will receive family and friends at calling hours from 4-7PM Thursday, January 9, 2020 at the Anderson Funeral Home, 25 Fitchburg Rd., (Rte 2A) Ayer. For additional information or to leave an on line condolence please visit their website at www.andersonfuneral.com.

The family of Maureen T. O'Brien created this Life Tributes page to make it easy to share your memories.

Send flowers to the O'Brien family.