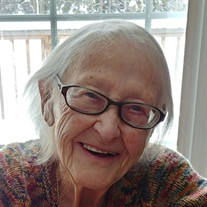 Ashburnham: Mary I. (Grimes) Ruth, 93, of Ashburnham, died Monday, December 24, 2018 at her residence. Her husband of 56 years, Joseph B. Ruth, Jr., died in September 2010. Mrs. Ruth was born in Gloucester, August 2, 1925, a daughter of Arthur J. and Mary (Murphy) Grimes and moved to Ashburnham 52 years ago. She was a 1943 graduate of Gloucester High School. She received her Bachelors Degree from Emmanuel College in Boston and later her Masters Degree from Salem State College. For 17 years Mrs. Ruth worked as the Executive Director of Gardner Red Cross Chapter. Prior to that she worked at New England Telephone. Towards the end of her working career, Mrs. Ruth Real Estate broker for Diane Dimacale Real Estate in Ashburnham. She was a member of St. Denis Church in Ashburnham. She enjoyed quilting and donated her quilts to many worthwhile charities. She leaves two sons, Joseph B. Ruth III and his wife, Mary Jane of Townsend, James A. Ruth of Gardner; three daughters, Eileen C. Cusick and her husband, John, of Springfield, Mary Ellen Cancellieri of Gardner and Kathleen M. Jackson her significant other, Carl Laplante of Templeton; her longtime friend and roommate, Amy Landry of Ashburnham; 14 grandchildren and 2 great grandchildren. She was the mother of the late John Ruth who died in 1956 and the sister of the late Leo Grimes of Melrose and Dr. Arthur Grimes of Ipswich. A Mass of Christian Burial will be celebrated 11 AM Saturday, December 29, 2018 at St. Denis Church, 85 Main Street, Ashburnham. Calling hours are 4-7 PM Friday at the Isabelle & Anderson Funeral Home, 316 Clarendon Street, Fitchburg. Please see www.andersonfuneral.com for additional information or to leave an on line condolence. Prayers of committal will be offered 11 AM Monday, December 31, 2018 at Calvary Cemetery, 151 Eastern Avenue, Gloucester.

The family of Mary I. Ruth created this Life Tributes page to make it easy to share your memories.

Send flowers to the Ruth family.