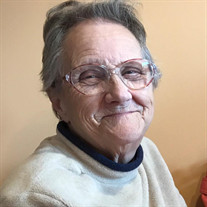 ASHBY: Mary O. (Wheeler) Lazette, 88, of Ashby, formerly of Pepperell and Brookline, NH, died Thursday, December 30, 2021 at her home. She was the wife of Ernest F. Lazette who died in March 2007. Mary was born in Brookline, NH, January... View Obituary & Service Information

The family of Mary O. (Wheeler) Lazette created this Life Tributes page to make it easy to share your memories.

Send flowers to the Lazette family.