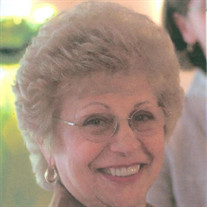 AYER; Mary (Koronis) Glantz Medeiros, 94, a lifelong resident of Ayer, died Thursday, April 9, 2020 at UMass- Memorial Medical Center, Worcester. She was the wife of the late Frank Glantz who died in 1978 and George Medeiros who died in 1999. Mary was born in Ayer, August 10, 1925, a daughter of Peter and Petra (Lambrinos) Koronis and graduated from Ayer High School in 1943. Following her graduation from high school, she went to work in the office at San-Vel Corporation in Littleton. Mary remained there for nearly fifty years, retiring in 1992 from the position of executive secretary. Mary was a longtime member of the Ayer- Shirley Lions Club, St. Andrews Episcopal Church in Ayer and had been an active member of the Nashoba Hospital Auxiliary. Mary leaves several nieces and nephews including Kathy and Kosta Ganias, Celia Koronis and her companion, Mark Stevenson, Peter and Lillian Koronis, Paul and Jeanine Wheatley, Stephen Koronis and many grandnieces and grandnephews. She also leaves a dear longtime friend, Ann Laggis, of Ayer. She was the sister of the late George Koronis, Andreas Koronis, Catherine Wheatley all of Ayer, Gianoula Bahaviolos of Worcester and Antonitsa Apostolakos of Greece. In lieu of flowers, donations can be made to St Andrew's Church in Ayer, the Ayer - Shirley Lions Club or Loaves and Fishes Food Pantry. Due to the COVID-19 gathering restrictions, funeral services will be held privately. Burial will be in Woodlawn Cemetery, Ayer. The details of a celebration of Mary's life will be posted to this site as soon as gathering restrictions are lifted. The Anderson Funeral Home, 25 Fitchburg Rd., Ayer is assisting the family with arrangements. To leave an on line condolence, please visit their website at www.andersonfuneral.com

AYER; Mary (Koronis) Glantz Medeiros, 94, a lifelong resident of Ayer, died Thursday, April 9, 2020 at UMass- Memorial Medical Center, Worcester. She was the wife of the late Frank Glantz who died in 1978 and George Medeiros who died in... View Obituary & Service Information

The family of Mary (Koronis) Medeiros created this Life Tributes page to make it easy to share your memories.

Send flowers to the Medeiros family.