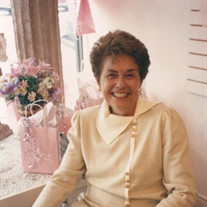 Mary R. (Ravey), Andrews, 94, of Harvard, died Friday evening, May 22, 2020, at home in the arms of her family. She was born in Brighton, MA on July 16, 1925, one of 11 children to the late John and Anne (Cameron) Spencer and was adopted and raised in Burlington, VT by her aunt and uncle, Charles and Gertrude (Cameron) Ravey. She was a graduate of Mt. St. Mary’s Academy in Burlington, VT and attended the University of Vermont. Mary will be remembered by her family and friends as a kind, caring, loving, and accepting person who adored her family. Her everyday goal was to have a positive influence on a single person. Mary would list her achievements in this order: her children, her grandchildren, her great grandchildren and many dear friends. But there were so many other things that made her special. She was President of the YWCA, Woonsocket, RI, Chairman of the Emerson Hospital Auxiliary, Concord Unit. Many will remember Andrews & Andrews in Concord, MA, the store she owned for 18 years. She was also an avid painter with many followers. She loved to teach her children and grandchildren how to paint. Her husband of 68 years, Joseph P. Andrews, died in 2012. She leaves two sons, Joseph P. Andrews Jr., of Londonderry, NH and his first wife, Linda Spring-Andrews, mother of John, Rebecca and Matt Andrews; Robert P. Andrews, formerly of Harvard; his current wife Idelka, and first wife Karen; two daughters, Carol Lee Tonge and her husband Thomas of Harvard and M. Patricia Cooper and her husband Mark of Harvard, one daughter-in-law, Betsy Andrews of Arlington, a daughter by choice, Gerri Kitrick Fagan; 16 grandchildren, John Andrews of Casselberry, FL, Rebecca Capone of Stratham, NH, Matthew Andrews of Lee, NH, James Andrews, Seattle, WA, Kate King, Orlando, FL and Patrick Andrews of Somerville, Andrew Tonge, Manchester, NH, Lindsey Tonge of Harvard, Lauren Andrews, Worcester, Ryan Andrews of Lancaster, Sarah Andrews of Los Angeles, CA, Jessy Andrews and Jenny Andrews both of Bolton, Eric Andrews of Orlando, FL, John Cooper and Annie Cooper both of Harvard; 5 great-grandchildren, Kendall Capone, Donovan Capone, Henry Andrews, Beatrix Andrews, Madeline King and numerous nephews and nieces. In addition to her husband she is predeceased by a son, John C. Andrews who died in 1989. Due to the current social gathering restrictions her Funeral Mass will be celebrated privately in Holy Trinity Parish - St. Theresa the Little Flower Church, 15 Still River Rd., (Rt. 110), Harvard followed by a burial in Bellevue Cemetery, Harvard. The Anderson Funeral Home, 25 Fitchburg Rd., (Rt. 2A), Ayer is assisting the family with the funeral arrangements. Please see www.andersonfuneral.com for additional information In lieu of flowers memorial contributions may be made to Care Dimensions Hospice, 75 Sylvan St., Danvers, MA or to the Massachusetts Lions Eye Research Fund: https://e-clubhouse.org/sites/harvardma/

The family of Mary R. (Ravey) Andrews created this Life Tributes page to make it easy to share your memories.

Send flowers to the Andrews family.