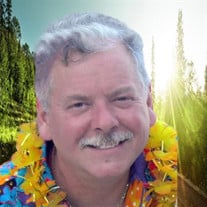 Ayer: Mark F. Decot, 59, a longtime resident of Ayer, died unexpectedly Wednesday, October 10, 2018 at Health Alliance, Leominster Hospital. Mark was born in Fitchburg, July 19, 1959, surprisingly born with two teeth!! The son of Carol R. (Picard) Madigan and the late Walter R. “Buddy” Decot and resided much of his life in Ayer. He was a 1977 graduate of Ayer High School. Following his graduation from high School, Mark enlisted in the United States Army and served two tours of duty in Germany; where he learned the speak the language fluently. For nearly 30 years Mark worked in the Department of Logistics at Devens. Serving a total of 36 years for the United States Federal Government. He was greatly looking forward to retiring at the end of this year, to spend more time with his granddaughters. In addition to his mother of Ayer, Mark leaves two daughters, Sophia M. Khourie of Ayer, Krystle M. Swits Harrison of Hobe Sound, FL; two sisters, Nancy A. Decot of Nashua, NH, Kathleen M. Decot of Harvard; four grandchildren, Mealofa T. Khourie, Alesi A. Khourie, Emma L. Harrison and Connor D. Swits. He leaves his longtime companion, Octavia (Ocky) Kilpatrick, mother of Sophia. He also leaves two nieces, Chloe D Cushing, Nina L Decot, nephew, Corey D Decot and his extended family of the Kilpatrick's. In 2001, he was predeceased by his brother, Matthew K. Decot of Groton. He was a beloved Papa, stopping by to see "his girls" daily. Also known as beloved "muncle" to his family. He was an avid motorcycle rider; who went from his first mini bike at age nine to graduating to owning a Harley Davidson. He was known for his projects and always giving some advice on how to get something done. A funeral Mass will be celebrated 11:00 AM Thursday, October 18, 2018, at St. Mary’s Church, 31 Shirley Street, Ayer. Burial will follow at Massachusetts Veteran’s Memorial Cemetery, Winchendon. Mark’s family will receive family and friends from 4-7 PM Wednesday. October 17th at the Anderson Funeral Home, 25 Fitchburg Rd., Ayer. Please see www.andersonfuneral.com for additional information or to leave an on line condolence.

The family of Mark F. Decot created this Life Tributes page to make it easy to share your memories.

Send flowers to the Decot family.