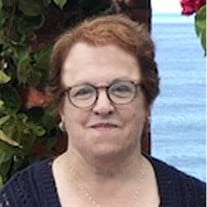 LEOMINSTER -- Maria Filomena (Chaves) Casavecchia, 63, of Leominster, formerly of Hudson, died unexpectedly on Wednesday, December 11, 2019, in her home in Leominster. Mrs. Casavecchia was born in Santa Maria, Azores, Portugal, on August 29, 1956, a daughter of the late, Jose M. and Filomena (Monteiro) Chaves and grew up in Hudson, graduating from Hudson High School in 1975. She has resided in Leominster for the past 25 years. She was currently working as a production manager at Columbia Technologies in Westboro. She enjoyed knitting, camping and fishing. She is predeceased by her husband of 21 years, Wayne V. Casavecchia who died in 2017. She leaves her two step-sons, Anthony W. Casavecchia and his wife, Victoria, of Ayer, Andrew W. Casavecchia and his wife Rosanna of Groton; five brothers, Herculano Chaves and Jose M. Chaves both of Portsmouth, RI, Antonio Chaves, Albert Chaves and Jose A. Chaves all of Hudson; a sister, Maria Monteiro of Hudson; six grandchildren, Nicholas Casavecchia, Mason Casavecchia, London Casavecchia, Sloane Casavecchia, Emery Casavecchia and Lex Casavecchia and numerous nephews and nieces. Her funeral Mass will be celebrated on Tuesday, December 17, at 10AM in St. Mary’s Church, 31 Shirley St., Ayer. Calling hours will be held on Monday December 16, from 4-7 PM in the Anderson Funeral Home, 25 Fitchburg Rd., Ayer. Please see www.andersonfuneral.com for additional information. In lieu of flowers memorial contributions may be made to Alzheimer's Association, 31 Arsenal St., Watertown, MA 02472

The family of Maria Filomena (Chaves) Casavecchia created this Life Tributes page to make it easy to share your memories.

Send flowers to the Casavecchia family.