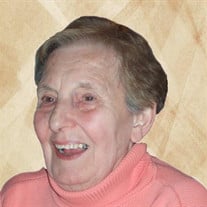 Ayer: Idilia Margaret (Martelosio) Tate, age 95, was born on June 20, 1924 in Grenoble, France. Her family was originally from Italy and had owned an Inn on the French/Italian border. In the early 1920's they were opposed to Mussolini and the Fascists who were taking over the Italian Government. Their Inn was burned to the ground by Mussolini's supporters and their lives put in danger. Her parents were secreted across the border into France by friends and they settled in Grenoble were Margaret was born, later the family to Lyon. Little did they know that another group of Fascists were looming over the western horizon. When she was a teenager in 1940, the Germans overran and occupied France and much of Europe. Intimidation, restrictions and scarcity dominated their existence. When Hitler was told that the people of France were slowly starving, his response was “let them eat grass.” Life was difficult until the Allies eventually invaded France in 1944 and defeated Germany in 1945. After the war she caught the attention of an American Master Sergeant, James Tate. They were married in June 1946. and remained married for 67 year until Jim's passing in 2012. Two children, Maryse and John, would be born while the Tates were stationed in France and later Germany. They spent several tours in Europe after the war as well as in the U.S until Jim retired while stationed at Fort Devens in 1965 after 26 years in the Army. The family enjoyed the area, settled here and formed many lasting friendships. After the WWII, when given the ingredients, Margaret became an excellent cook, perhaps the result of having to “eat grass.” An invitation to the Tate household for dinner, especially Thanksgiving Dinner, was welcome and coveted. She was an animal lover of the first magnitude who also enjoyed providing daily sustenance for the neighborhood wildlife. They often chattered or chirped their appreciation. Margaret worked at George Frost Company until retiring at age 65. She became a volunteer at the Nashoba Valley Medical Center, working as a receptionist at the visitors' desk and delivering gifts and flowers to the patients. She was highly skilled knitter and crocheter and joined in with the members of the Ayer Senior Center to craft clothing, scarves and mittens for donation to charitable organizations. She and her husband Jim enjoyed an occasional bus trip to Atlantic City with the Ayer Senior Citizens, although not gamblers, they enjoyed traveling and interacting with the other riders. Later in life she contracted macular degeneration, a familial malady, causing her to lose most of her vision, but she continued knitting scarves for the children at the Hilltop School to use during recess as her daughter volunteered there as a teachers aid. Although restricted by it she persevered and managed to function and get around satisfactorily during her daily life. Margaret was an avowed and proud Socialist who felt it was the responsibility of the government to care for its citizenry by providing medical care, family maternity leave, aid for women and children, or any policy that supported the public well being. Recently when informed that NAZI stood for National Socialist German Workers' Party she replied “that can't be true, no Socialist would ever do what they did.” She is survived by her daughter Maryse Tate and her companion James Hurley of Ayer, her son John Tate and daughter-in-law Nancy Tate of Townsend; a sister Maria Fiore of Villeurbanne, France, a niece Christine Bise and her husband Jean Claude, and nephews Christophe and Nicolas Bise, all of Tailloires, France. A private service will be followed by interment at Woodlawn Cemetery beside her beloved husband. She will be deeply missed by her loving family. Margaret's family want to express its sincere appreciation to the Apple Valley Center staff for the wonderful and compassionate care she received during her recent illness.

Ayer: Idilia Margaret (Martelosio) Tate, age 95, was born on June 20, 1924 in Grenoble, France. Her family was originally from Italy and had owned an Inn on the... View Obituary & Service Information

The family of Margaret Tate created this Life Tributes page to make it easy to share your memories.

Send flowers to the Tate family.