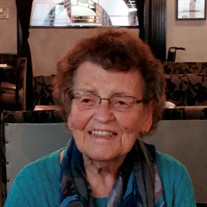 Margaret A. “Peg” (Milligan) Matthews, 98, of Townsend, died Wednesday, February 12, 2020 after a short stay in the Apple Valley Center in Ayer. Peg was born in Prince Edward Island (PEI), Canada, on October 15, 1921, a daughter of the late Herbert and Rose (MacLean) Milligan. In her early 20’s - during war time, with no work to be found in PEI Peg moved to the US to work at the Waltham Watch Company. At the end of the war Peg met her first husband Arnold Misner (d.1973) of Townsend MA, while they both worked at Waltham Watch; he was the repairman who fixed the tools she used to assemble the watches. She and Arnold were married for nearly 25 years prior to his unexpected death. Subsequently, she was employed as a proof-reader at New England Business Service in Townsend for several years prior to her retirement in 1982. Possessing a strong faith in God and community, Peg was a member of the Townsend Congregational Church. She lived a full but simple life always seeing the good in both people and situations, and continually willing to participate in the next new adventure life had to offer. For nearly twenty years Peg traveled extensively with her second husband, Frederick T. Matthews (d.1998); traveling to every state in the US and every providence in Canada by way of a forty-foot RV - for which, she could occasionally be seen driving despite her four foot-ten stature. Peg had a tenacious love of family. She leaves two loving brothers, Victor Milligan and John Milligan of Ontario. She also leaves two very special and caring stepdaughters, Cindy Jeannotte of Shirley and Prudence Bourque of Leominster. Peg had a very special place in her heart for all her nephews and nieces, but David Profit of Boothbay Harbor, ME held a central spot as her confidant and unyielding caregiver. In addition to her husbands, Peg was predeceased by her bothers Rod Milligan and Leigh Milligan, and a sister Mildred Milligan. A graveside service in the Hillside Cemetery in Townsend will be held at a later date. There are no calling hours. The T. J. Anderson Funeral Home, 250 Main St., is assisting the family with the funeral arrangements. In lieu of flowers memorial contributions may be made to Townsend Congregational Church at 3 Brookline Street, Townsend, MA 01469.

The family of Margaret A. (Milligan) Matthews created this Life Tributes page to make it easy to share your memories.

Send flowers to the Matthews family.