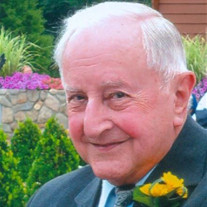 Shirley: Marcel J. Gionet, 88, of Shirley, passed away peacefully Saturday, September 29, 2018 at his home. The love of his life, his wife of 34 years, Annette M. (Gendron) Gionet died in 1991. Marcel was born in Shirley, one of 15 children born to Felix and Marie-Ange (Joyal) Gionet and resided in Shirley for most of his life. He attended St. Anthony’s School in Shirley and St. Joseph’s Juniorate in Tyngsboro before graduating from St. Bernard’s Central Catholic High School in Fitchburg in 1948. Following his graduation from high school Mr. Gionet served his country for four years in the United States Air Force. Following his discharge from the armed services, Mr. Gionet continued his education at Fitchburg State College where he received his Bachelors Degree in Liberal Arts. For 30 years Mr. Gionet taught science at Hale Junior High School in Stow, retiring in 1992. He was a lifelong member of St. Anthony's Church in Shirley. He had been very active in the Shirley American Legion Post where he served as a Past Commander, Adjutant Commander, Chaplain and a member of the Board of Trustees to the War Memorial Building. Marcel was a loving father, grandfather and great grandfather. He leaves 4 daughters, Michelle A. Studlien and her husband Eric, of Leominster, Nicole M. Hunt and her husband, Richard, of Arizona, Melanie E. Buklerewicz and her husband, Terry, of Ayer, Monique M. Quinn of Shirley; a brother, Donald Gionet of Shirley; seven grandchildren, Stephanie, Jacquleen , Christopher, Heather, Joshua, Stephen, Julia and 4 great grandchildren, Caleigh, Anthony, Eleanor and Adeline. In 2013 he was predeceased by a son in law, Mark Quinn or Florida. He was the brother of the late Roland, Cyril, Bertrand, Laurier, Oliver, Dennis, Claude, Priscilla Harkin, Sister Prudence Gionet, Sister Delores Gionet, Lorraine Harkin, Gertrude Gionet and Claudia Gionet. A funeral Mass will be celebrated 10 AM Thursday, October 4, 2018 at St. Anthony’s Church, 14 Phoenix Street, Shirley. Burial will be in St. Anthony's Cemetery, Shirley. Calling hours will be 4-7 Wednesday, October 3rd at the Anderson Funeral Home, 25 Fitchburg Rd., Ayer. Please see www.andersonfuneral.com for additional information or to leave an on line condolence. In lieu of flowers please donate to www.fallenherosfund.org.

Shirley: Marcel J. Gionet, 88, of Shirley, passed away peacefully Saturday, September 29, 2018 at his home. The love of his life, his wife of 34 years, Annette M. (Gendron) Gionet died in 1991. Marcel was born in Shirley, one of 15 children... View Obituary & Service Information

The family of Marcel J. Gionet created this Life Tributes page to make it easy to share your memories.

Send flowers to the Gionet family.