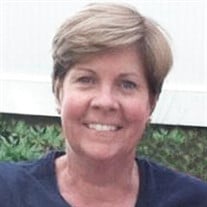 GROTON: Lucy A. (Black) Alexander, 60, passed away on Sunday, December 29, 2019 at The Atrium in Chelmsford after a six year battle with Alzheimers Disease. Lucy was born in Groton on September 15, 1959, daughter of the late Bennett R. and Mildred E. (Morris) Black. She resided in Groton for most of her life, a 1977 graduate of Groton-Dunstable Regional High School. Lucy received her business degree from Salem State University in 1981. Lucy worked for several years at Digital Equipment Corporation, and later The New England Forestry Foundation before going to work in the North Middlesex Regional School System as a teachers aide at the Peter Fitzpatrick School in Pepperell. Lucy loved spending time with her family, relaxing with a book and a glass of wine, or going out with friends. She and David always enjoyed an extensive network of friends, many of who are counted as family today. Lucy loved spending time at the family cottage in Fairhaven, relaxing on the deck with a margarita and her sun visor. She was always up for a weekend away, an iced Carmel latte or a shopping trip to find the best deals. Lucy leaves her husband of 33 years, David B. Alexander; her son, Benjamin D. Alexander of Groton; her daughter and son in law, Kelly M. and Ryan Warner of Stoneham; three brothers, Donald Black, Robert Black and Bennett Black all of Groton. She also leaves several nieces and nephews, and her beloved cat Lily. Funeral services will be held 11 AM Saturday, January 11, 2020 at the Anderson Funeral Home, 25 Fitchburg Rd., (Rte. 2A) Ayer. Burial will be held privately. Calling hours are 4-7 PM Friday, January 10, 2020 in the funeral home. Memorial contributions may be made to The Alzheimer’s Association.

GROTON: Lucy A. (Black) Alexander, 60, passed away on Sunday, December 29, 2019 at The Atrium in Chelmsford after a six year battle with Alzheimers Disease. Lucy was born in Groton on September 15, 1959, daughter of the late Bennett R. and... View Obituary & Service Information

The family of Lucy A. (Black) Alexander created this Life Tributes page to make it easy to share your memories.

Send flowers to the Alexander family.