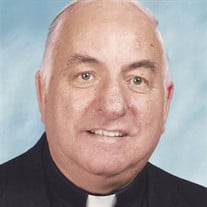 FITCHBURG: Rev. Fr. Louis J. Gould, 89, formerly of Fitchburg, died Friday, November 8, 2019 at University of Massachusetts – Memorial Hospital, Worcester. He was the brother of the late Leo Paul Gould of Fitchburg who died in 2010 and the step brother of the late Arthur Veautour. Fr. Gould was born in Fitchburg, September 13, 1930, a son of William and Beatrice (Cormier) Gould. He graduated from St. Joseph’s School, Fitchburg and in 1945 entered the LaSalette Fathers Seminary in Enfield, NH. Before beginning his theological studies at the LaSalette Seminary in Ipswich, he also studied at the order’s schools in Hartford, Bloomfield, CT and Altamont, NY. He was ordained May 26, 1962 in Ipswich by Auxiliary Bishop Thomas J. Reiley of Boston. During his early years with the Missionary Society of Our Lady of LaSalette, he was perfect of the seminary in Cheshire, CT and then assigned to Our Lady of Sorrows Church in Hartford. He served as principal of the Parish school while overseeing the radio broadcast of the Sunday Novena. In 1968 he was appointed director of LaSalette theologate in Ipswich. Seven years later, while on sabbatical, he took part in the clinical pastoral education program at the Mayo Clinic in Rochester, Minnesota. He returned to Massachusetts in 1977 an served as pastor of Saint Joseph’s Parish in Fitchburg. He was incardinated as priest of the Diocese of Worcester on September 21, 1990. He served as associate pastor of the St. Joan of Arc Parish, Worcester and St. Mary’s Parish, North Grafton before being named administrator of Our Lady of Fatima Parish, Worcester on Oct 26, 1990. He was named pastor of Our Lady of Fatima Parish, June 1993. He was named a chaplain at St. Vincent’s Hospital on September 1, 2000. He retired from active ministry in June 2005. Fr. Gould will lie in state at St. Joseph’s Church, 49 Woodland Street, Fitchburg on Thursday, November 14, 2019 from 4PM - 7 PM A vigil service will be offered at 7PM. The Mass of Christian Burial will be held 11 AM Friday, November 15, 2019 at St. Joseph’s Church. Burial will be in the parish cemetery. The Isabelle & Anderson Funeral Home, 316 Clarendon Street, Fitchburg is assisting the family with arrangements.

FITCHBURG: Rev. Fr. Louis J. Gould, 89, formerly of Fitchburg, died Friday, November 8, 2019 at University of Massachusetts &#8211; Memorial Hospital, Worcester. He was the brother of the late Leo Paul Gould of Fitchburg who died in 2010 and... View Obituary & Service Information

The family of Father Louis J. Gould created this Life Tributes page to make it easy to share your memories.

Send flowers to the Gould family.