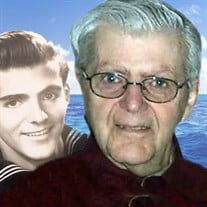 Ayer; Louis E. Gobeille, 92, of Ayer, formerly of Chelmsford and Rhode Island, died Tuesday, October 9, 2018 at his home with his sweetheart by his side. Mr. Gobeille was born in Woonsocket, RI, December 8, 1925, a son of Emile Louis Gobeille and Mary (Lapierre) Gobeille, Perron, Comire and resided much of his life in Rhode Island before moving to Billerica, Chelmsford settling in Ayer 19 years ago. After graduating from Woonsocket High School in 1943, Mr. Gobeille served his country in the United States Navy during World War II aboard the LSM(R)-198. He later continued his education and received a Bachelors Degree from Roger Williams University in Bristol, RI graduating in 1972, the same year that his daughter graduated high school. Mr. Gobeille held several positions at companies including Honeywell Corporation in Billerica, MA, Cambridge Memories in Burlington, MA before completing his career as a Technical Publications Manager at Digital Equipment Corporation in Merrimack, NH. He leaves his wife of 71 years, Jeannette A. Gobeille; his daughter and son-in-law, Darlene M. and Ernest J Johnson with whom he resided in Ayer; four grandchildren, Michelle (Hovey) Higginbottom, Jennifer (Hovey) Beauregard, Karen Johnson, Timothy Johnson; 12 great grandchildren — Jesse, Chase, Brianna, Jordyn, Calvin, Jocelyn, Dylan, Laela, Kaiden,Ty, Shylah, and Yasmine and one great-great grandchild--Emmelia. He was predeceased by his brothers Paul and George Gobeille, Alfred Perron and sister Olive Couture. Mr. Gobeille attended St. Mary’s Church in Ayer and St. Anthony’s Church, Shirley. He enjoyed oil painting, word puzzles and singing, playing the guitar and harmonica. He loved spending time with his family on Ossipee and Winnisquam Lakes. He was a kind and gentle soul. A one-of-a-kind man who defined what a true gentleman is. He will be forever loved and remembered as a truly special person to all those whose lives he touched. A funeral Mass will be celebrated 11 am Monday, October 15, 2018 at St. Anthony’s Church, 14 Phoenix Street, Shirley. Mr. Gobeille’s family will receive family and friends on Monday from 9:30 – 10:30 AM at the Anderson Funeral Home, 25 Fitchburg Road, (Rte 2A) Ayer. Please see www.andersonfuneral.com for additional information or to leave an on line condolence. Memorial contributions may be made to the Alzheimer's Disease Assn.

Ayer; Louis E. Gobeille, 92, of Ayer, formerly of Chelmsford and Rhode Island, died Tuesday, October 9, 2018 at his home with his sweetheart by his side. Mr. Gobeille was born in Woonsocket, RI, December 8, 1925, a son of Emile Louis Gobeille... View Obituary & Service Information

The family of Louis E. Gobeille created this Life Tributes page to make it easy to share your memories.

Send flowers to the Gobeille family.