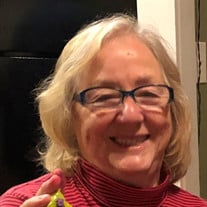 TOWNSEND: Katherine L. “Kathy” (Smith) Jastrab never wanted to be the center of attention. She died Saturday, September 4, 2021 (age 71), and for once, is not going to get her way. Kathy was born in Clinton on October 9, 1949. As the eldest daughter of Leslie and Mildred (Bourguignon) Smith, Kathy got an early start on helping to raise a family. She baked her sibling’s birthday cakes, bought them outfits for school, and took them on the train to Boston. One of her favorite games was when someone on one side of the house would shoot an arrow over the top so everyone on the other side of the house would have to dodge it. After graduating from North Middlesex in 1967, Kathy earned a bachelor’s degree in teaching from Fitchburg State. She was grateful that she never needed to use it. She pursued a career as an antiques dealer instead, working for over twenty years at Hobart Village in West Townsend. Visitors to the shop enjoyed Kathy’s unassuming attitude and gift for conversation. She liked to hear their stories and dirty jokes. Kathy loved to sing but never in tune. Her cover of Foreigner’s Hot Blooded, “Hot Fudgies”, was famously accompanied by her throwing freshly ironed clothes at her audience. As a result, her children and grandchildren always went to school warm and wrinkle-free. Kathy’s other performances were built on her skills as a storyteller. She convinced her children that St. Bernard’s in Fitchburg was a school for dogs and would roll the windows down in the car so the kids could bark at it. She never won an Oscar but got out of many speeding tickets, as well as the responsibility of picking up the Vet’s office after her cat destroyed it. She called it her “poor little old lady” act. While she resided most of her life in Townsend, Kathy never missed an opportunity to travel. Highlights included England, Germany, Hong Kong, the Netherlands, and a trip to Washington D.C. that resulted in a ban from the city for vehicle emissions. Her biggest mistake was letting her sister drive to Montana without checking the fuel gauge. Her second biggest mistake was staying at what she called “the Bates Motel”. Kathy hated Oliver Twist, pretense, and poor grammar. She was an avid reader and volunteered for many years at the Townsend Public Library, where she coordinated the annual book sale. She leaves four children, Benjamin Jastrab of Bolton, Andrew Jastrab of Townsend, Daniel Jastrab of Townsend, and Laura Jastrab of Stow, as well as five grandchildren, Madison Jastrab, Tyler Jastrab, Nathanael Jastrab, Aaron Jastrab, and Natalie Jastrab. She also leaves her siblings, Michael Smith of Las Vegas, Richard Smith of North Chittenden, VT, Stephen Smith of Colorado, Judith Baker of Mendon, Utah, Shirley Elsisie of Peyton, Colorado, Mary Balls of Rindge, NH, and Paula Smith of Florida. Her legendary pie recipe she took with her. A private memorial service will be held at the Anderson Funeral Home, 250 Main Street, Townsend Center. Not one for emotion, Kathy would be embarrassed by tears. She asks that you find bigfoot and take his picture, and she hopes that you “get your money for nothing and your chicks for free”.

The family of Katherine L. (Smith) Jastrab created this Life Tributes page to make it easy to share your memories.

Send flowers to the Jastrab family.