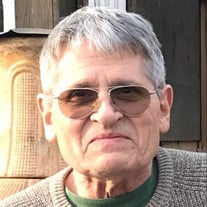 LUNENBURG- Karl A. Klauer, 69, of Lunenburg, died Wednesday, January 16, 2019, in his home after a long battle with cancer. He was born in Cambridge on May 15, 1949, a son of the late Alwin and Elsie (Marshmann) Klauer. He grew up in Acton, where he was an Eagle Scout and a member of the varsity football team. He graduated from Acton-Boxboro High School in 1967, and went on to receive both his bachelor’s degree in accounting and his master’s degree in business administration from Babson College. Karl worked at Hanscom Air Force Base as a financial analyst for thirty-four years prior to his retirement in 2006. In 2008, he returned to Hanscom as a consultant and continued to work until just one month before his passing. He loved his co-workers and considered them his second family. He was an avid gardener, spending most summer evenings growing flowers and vegetables, and enjoyed interior woodworking projects. Karl loved fly fishing for salmon across New England, especially at East Grand Lake in northern Maine. He also enjoyed vacationing with his family and friends in Cape Porpoise, walking his dogs, and searching for sand dollars along the Maine coast. He spent twenty years delivering for Meals on Wheels in the Bedford community. Above all, Karl was most passionate about animal rescue efforts, and spent much of his free time fostering, rehabilitating, and transporting dogs from kill shelters to their forever homes. Karl leaves his wife Mary L. Adams of Lunenburg; daughters Jessie E. Klauer of Lunenburg and Schenley L. Klauer of Milford, NH; a brother, William A. Klauer and his wife Amber of Acton; a sister Joanne Klauer of Baldwinville and many nephews and nieces. Karl will be most remembered driving through town in his truck with his dogs, and heckling his daughter (his form of cheering) on the sidelines during high school and college sporting events. Calling hours will be held on Friday, January 25, from 4 to 7 PM in the Anderson Funeral Home, 25 Fitchburg Rd., Ayer. A funeral Mass will be held on Saturday, January 26, at 11AM in St. Boniface Church, 817 Massachusetts Ave, Lunenburg. In lieu of flowers memorial contributions may be made to Save a Dog, one of Karl’s favorite rescue groups, 604 Boston Post Rd., Sudbury, MA 01776. www.saveadog.org. For further information or to leave an online condolence please visit www.andersonfuneral.com

LUNENBURG- Karl A. Klauer, 69, of Lunenburg, died Wednesday, January 16, 2019, in his home after a long battle with cancer. He was born in Cambridge on May 15, 1949, a son of the late Alwin and Elsie (Marshmann) Klauer. He grew up in Acton,... View Obituary & Service Information

The family of Karl A. Klauer created this Life Tributes page to make it easy to share your memories.

Send flowers to the Klauer family.