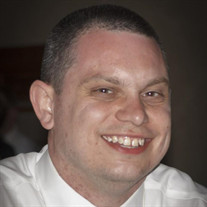 FITCHBURG: Justin Luke Mertz, 40, of Fitchburg, passed away Wednesday, April 6, 2022. Justin was born in Hagerstown, MD, October 30, 1981. He was the oldest son of Donald and Wendy (Heiks) Mertz. Justin was a 1999 graduate of South Hagerstown High School. He earned an Associate Degree in Criminal Justice at Hagerstown Community College in 2003, a Bachelor of Science in Psychology at Valley Forge Christian College in 2007 and a Master of Science in Clinical Mental Health Counseling at Fitchburg State University in 2018. Justin was known for the way he loved, accepted, and encouraged others. He had a passion for helping people, which he did countless times for his family, friends and clients. He also enjoyed interacting with people who have developmental disabilities. Justin was an avid film lover, sometimes feeling compelled to write reviews or essays on the films he watched. He fell in love with the trumpet during high school, and he continued to play until his final days. Music was important to him, and he appreciated a wide array of artists, including Michael Bublé, Switchfoot, Tower of Power, John Mayer, and Terrence Blanchard. He enjoyed reading and collecting novels and short stories by his favorite author, Stephen King. Justin also loved graphic novels, painting with watercolors, sketching, and cheering on the Patriots. He may have never felt more at peace than when he had the opportunity to cruise the Caribbean. However, it was his relationship with God that meant the most to him. Justin is survived by his wife, Jaclyn (Raymond) Mertz and his precious daughter Aria, who filled his heart with joy. He is also survived by his parents; his grandmother Gayle Heiks; his siblings, Samantha Albright (Mark), Emily Tomlinson (Kevin), Benjamin Mertz (Caitlin), Nick Mertz, Sean Mertz (Mia), Patrick Mertz (Kristen) and Sarah Mertz; nieces Jillian, Natalie, Aubree and Jolie; nephews Luke, Elijah and Aiden; mother-in-law Tricia Raymond, sister-in-law, Rachel Raymond and brother-in-law, Lee Raymond (Amy); his best friend, best man and brother from another mother, Seth Faulder; and countless aunts, uncles, cousins, friends and clients, all of whom have been touched by his everlasting love, grace and understanding. Justin was preceded in death by paternal grandparents Wanda and Donald Mertz Sr. and maternal grandfather Richard E. Heiks. Two services will be held to accommodate those who wish to join together to remember Justin in the two states he called home. Calling hours will be held at the Isabelle & Anderson Funeral Home, 316 Clarendon Street, Fitchburg on Monday, April 25 from 10:00 to 11:00 AM. Funeral services will take place at 11 am in the funeral home. Burial at St. Bernard’s Cemetery, Fitchburg, to follow. For additional information or to leave an online condolence, please visit their website at www.andersonfuneral.com. A memorial service will be held in Hagerstown, MD on May 1st at 1 PM at Grace Academy. 13321 Cearfoss Pike, Hagerstown, MD. In consideration of all who wish to attend, including those with compromised immune systems, the family respectfully requests that masks are to be worn. In lieu of flowers, Justin’s family would appreciate if those who loved Justin could write letters to his daughter, Aria, informing her about why they loved him, how he blessed their life, and/or special stories that will help her understand who he was and how he touched the world. Please contact Jaclyn privately for her mailing address if you need it.

FITCHBURG: Justin Luke Mertz, 40, of Fitchburg, passed away Wednesday, April 6, 2022. Justin was born in Hagerstown, MD, October 30, 1981. He was the oldest son of Donald and Wendy (Heiks) Mertz. Justin was a 1999 graduate of South Hagerstown... View Obituary & Service Information

The family of Justin L. Mertz created this Life Tributes page to make it easy to share your memories.

Send flowers to the Mertz family.