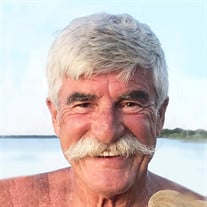 TOWNSEND: Julian P. Ceike, 72, of Townsend was removed from life support Sunday, September 1st, 2019. He was never able to recover from complications of an undetected heart attack, and his heartbroken family was at his side. Born in Manhattan in 1946, the only child of Frances Naughton and Peter Ceike. Julian came from a family of artists, both visual and musical. He rollerskated the streets of New York City as a child, and took the subway alone to sing in Saint Luke’s choir. He sailed to Spain on the yacht, Vilasar, with his grandmother’s husband when only a boy, where, curiously, he fell in love with the French language. He graduated from the Hotchkiss School and Union College, and partially completed a Master’s degree in French at the University of Colorado. It was there that he met and married his wife of 44 years, Fredda, who was an instructor in English. With prospects for finding employment teaching French virtually disappearing, he returned to the East coast, and took a job offered to him at Bates Corrugated Box company in West Townsend. Quickly realizing he was not cut out for office work, he decided to take his natural athleticism, love of the outdoors, willingness to do physical labor and overall competencies, to cut down trees. With a chainsaw he bought at a yard sale, he became his own business, which he owned and operated for over thirty years, Neighborhood Tree Service. In addition to his wife, he leaves his sons Seymour of Montana and Colin of Colorado, his daughter Lauren of Rhode Island, and their partners, his granddaughter, JaeLee Ceike-Cleary of Ashby, as well as his sisters, Katherine Lopez of Colorado, Myra South of Oregon and Helen Ceike Ojeda of California. Julian was greatly admired by the hundreds of people he guided through their first time on skis in his 19 years as a ski instructor at Wachusett Mountain; by the much younger men with whom he did arduous labor; by his teammates and competitors in the Wachusett Nighttime Race League; by cats and dogs he encountered who could sense his animal magnetism and were drawn to him; even by the many squirrels and birds whose homes he would try to protect when taking down a tree. In other words, Julian was a legend, not in his own mind, but in ours. Mr. Ceike’s family will receive family and friends at calling hours on Sunday September 8, 2019 from 2-5PM at the Anderson Funeral Home, 250 Main St., (RT 119) Townsend Center. For further information or to leave an online condolence please visit www.andersonfuneral.com.

TOWNSEND: Julian P. Ceike, 72, of Townsend was removed from life support Sunday, September 1st, 2019. He was never able to recover from complications of an undetected heart attack, and his heartbroken family was at his side. Born in Manhattan... View Obituary & Service Information

The family of Julian P. Ceike created this Life Tributes page to make it easy to share your memories.

TOWNSEND: Julian P. Ceike, 72, of Townsend was removed from life...

Send flowers to the Ceike family.