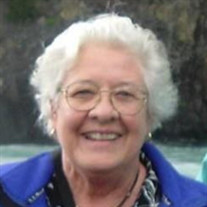 J. Elizabeth “Beth” (Mitchell) Fitz-Estes died on February 4, 2021 at age 90 in Shirley, Massachusetts with her loving family by her side. She was born on March 29, 1930 to Marion Tilden Mitchell and Floyd Allen Mitchell in Honolulu, Territory of Hawaii when her father was stationed at Fort Shafter. As a young girl she was especially close to her father and enjoyed fishing and outdoor adventures with him. She was deeply affected by his death in World War II and forever carried sadness from that loss but also pride in knowing of her father’s heroism during the war. She graduated from high school in 1948 in Amherst, Massachusetts and then earned a BA degree in biology from Middlebury College in 1952. In 1953 she married Robert Fitz and later that year was hired as the first employee of Digital Equipment Corporation, which developed some of the world’s first computers. She had three children with her husband Robert: John M. Fitz, Thomas J. Fitz, and Nancy E. (Fitz) Sumner. Her children meant the world to her and she was a loving mother who taught her children about love, integrity, and the beauty in nature. After her children were grown, she returned to Digital Equipment Corporation as an executive secretary. Following the death of her husband Robert, she eventually met and married Willard H. Estes to whom she was happily married for the rest of her life. Beth and Will had many grand adventures in their 33 years together. Beth grew beautiful gardens full of flowers and was known as “the flower lady” because she gave away bouquets every opportunity she had. She is survived by her husband Will, her three children: John (and his wife Linda Jenkins), Tom, and Nancy (and her husband Greg Sumner); five grandchildren (Jamie Fitz, Michelle Fitz, Mary Sumner, Katherine Sumner, and Leland Sumner); and two great grandchildren (Jude Fitz-Souza, and Lisa Fitz). A private memorial service will be held by her family in the springtime at the family gravesite in Harvard, Massachusetts. Arrangements are under the direction of Anderson Family Funeral Homes, 25 Fitchburg Road, Ayer, MA. To place an online condolence, please visit Beth’s tribute wall, at www.andersonfuneral.com.

J. Elizabeth &#8220;Beth&#8221; (Mitchell) Fitz-Estes died on February 4, 2021 at age 90 in Shirley, Massachusetts with her loving family by her side. She was born on March 29, 1930 to Marion Tilden Mitchell and Floyd Allen Mitchell in Honolulu,... View Obituary & Service Information

The family of Joyce Elizabeth Fitz-Estes created this Life Tributes page to make it easy to share your memories.

Send flowers to the Fitz-Estes family.