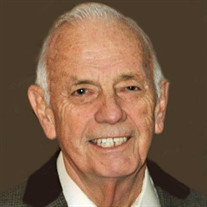 TOWNSEND: Joseph Richard Potvin, 84, of Townsend, died peacefully with his family by his side at Leominster Crossings on December 16, 2020. He was the beloved husband for 58 years to Claire B. Potvin who preceded him in death on November 12, 2017. Joseph was born in Lewiston, Maine on May 19, 1936, son of the late Adelard and Albertine (Dubois) Potvin. He grew up and attended high school in Lewiston, Maine and in August 1954, at the age of 18, enlisted in the US Air Force. Joseph met his future wife, Claire Dube, in Auburn, Maine while he was stationed at Topsham Air Force Base. They were married on June 6, 1959 in Lewiston, Maine. Joseph, an Air Force Veteran, proudly served his country for over 26 years, and was stationed in many locations including Thailand, England, Oslo, Norway, Rome, NY, Chicopee, MA, and finally Hanscom Air Force Base in Bedford, MA. Upon his retirement from the Air Force as a Master Sergeant in November 1980, Joe and Claire settled in Townsend, MA. After retiring from the Air Force, Joe was employed by Martin Marietta Corporation and later by General Electric. Joseph loved to spend time with his family and was always in attendance for his grandchildren’s sporting events, school plays, and graduations. In addition to spending time with his family, Joseph enjoyed spending time in their RV and loved the annual summer trips to Powderhorn and Hampton Beach with his grandchildren. Joseph was an active member of St. John’s Church in Townsend, MA. Joseph is survived by his son Gil Potvin and his wife Karen of Merrimack, NH, and son Raymond Potvin and his partner Laurie Daniel of Leominster, MA. He was a beloved Pépère to his four grandchildren of whom he was so enormously proud, Erika King and her husband Tim of Manchester, NH; Nicholas Potvin and his wife Katelyn of Nashua, NH; Ross Potvin and his partner Taylor Landry of Leominster; and Ryan Potvin and his partner Haylee Hebert of Gardner, MA. He is also survived by his sister Dorothy Levasseur of Lewiston, ME; sister-in-law Pauline Ouellette of Auburn, ME; sister-in-law Louise Poulin and her husband Don of Lewiston, ME; sister-in-law Corrine Potvin of Wichita, Kansas; Sherry Potvin (mother of Ross and Ryan); many cousins, nieces, and nephews; and numerous dear friends. Joseph was preceded in death by his parents, his loving wife Claire, and his brothers Robert Potvin and Gerald “Jerry” Potvin. The family would like to express their sincere appreciation and gratitude to his care givers and staff at Leominster Crossings and the Hospice team at Nashoba Nursing for their compassionate care. Calling hours are 4-7pm Monday, December 21, 2020 at the Anderson Funeral Home, 250 Main Street, (Rte 119) Townsend Center. A service will be held on Tuesday, December 22, 2020 at 11:00 am at the funeral home followed by burial at 1pm in Massachusetts Veterans Cemetery, Winchendon. Please see www.andersonfuneral.com for additional information. For those who wish, the family would encourage donations in his memory made to a charity of your choice.

TOWNSEND: Joseph Richard Potvin, 84, of Townsend, died peacefully with his family by his side at Leominster Crossings on December 16, 2020. He was the beloved husband for 58 years to Claire B. Potvin who preceded him in death on November 12,... View Obituary & Service Information

The family of Joseph R. Potvin created this Life Tributes page to make it easy to share your memories.

Send flowers to the Potvin family.