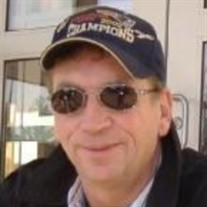 NORTH GRAFTON: Joseph R. Cautela, Jr., 68, of North Grafton, died Wednesday, December 16, 2020. Joseph was born on June 19, 1952 in Dorchester, Massachusetts to Joseph and Claire (Walsh) Cautela. He grew up in Natick, Massachusetts. He graduated from Natick High School in 1970 and went on to work as a copier salesman for over thirty years. He was also a part-time DJ. Joseph had a passion for sports, movies, TV, music, and history. He was an avid Boston Red Sox and New England Patriots fan, known for watching every game that was broadcasted. One of his favorite places was the movie theater, he looked forward to taking his children to see all the new Star Wars and Marvel movies on opening night. He loved watching television and one of his favorite memories was binge-watching Game of Thrones with his late partner Maryann. He was a music enthusiast and loved blasting rock music at the highest volume that his speakers could go. Also, he was known for his avid interest in studying controversial historical events. Everyone knew not to bring up the JFK assassination around him unless you had three hours to spare for a history lesson. He was known for his intelligence, big heart, and loving attitude. He is survived by his two children: Elizabeth Cautela and Joseph Cautela III of Hudson, his brothers: Robert Cautela of Merrimack NH, Christopher Cautela of Waterford NY, Salvatore Cautela of Saratoga Springs NY, Mark Cautela of Lexington, his sister Carol (Cautela) Landers of Shirley, his best friend William Lane and his wife Victoria Lane of Oxford, several cousins, and many nieces and nephews. He is predeceased by two brothers: Richard Cautela and John Cautela, his parents: Joseph R. Cautela Senior and Claire Cautela, his step-mother Joan (Julie) Cautela (Gleason), and his dear friend and companion Maryann Orrico. A private burial will be held at a later date and a celebration of life party will occur in the summer. In lieu of flowers, memorial contributions should be made to the March of Dimes nonprofit organization, as he often volunteered to DJ the Worcester March of Dimes road race.

The family of Joseph R. Cautela Jr. created this Life Tributes page to make it easy to share your memories.

Send flowers to the Cautela family.