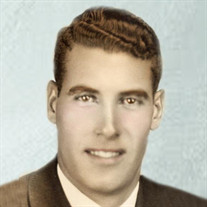 NATICK: Joseph “Joe” John Beninati Jr.93, died at the Eliot Center for Health and Rehabilitation Nursing Home, Natick, Massachusetts. He was born in Mafa Italy, September 18, 1926 and was the son of Joseph ”Guiseppe” John Beninati Sr and Maria (Sidoti) Beninati. He migrated from Italy in 1932 on the SS Augustus, coming through Ellis Island at the age of six. He along with his family settled in Brighton, until his marriage to his first wife, Cynthia A Huntoon, December 4, 1949 at St Cecilia’s Church in Boston. In 1960, Joseph moved to Natick along with his wife and four children, where he resided until his death. Joseph first worked at the Seiler Company in Boston as a chauffeur and truck driver. In 1960, he started working in the construction business as a mason until retiring in 2001 at age 65. On June 24, 1978, he married his second wife, Dorothy L. (Dubois) Moore at The Federated Church Of Ashland in Ashland Massachusetts. They renewed their vows in the Catholic Church on their First Anniversary, June 24, 1979 at St Linus Church, Natick, Ma. Joseph’s greatest joy was working in his garden, growing vegetables and tending to his fruit trees. Every spring, you would find him plowing the land on his vintage orange tractor getting ready for planting season. He would grow his vegetables from seed and at harvest time he would sell them at his small farm stand in the front of his house on Speen Street in Natick. His love for gardening showed by the quality of the fruits and vegetables he produced. Joseph was a former member of the Natick Sons of Italy. He took great pride in his Italian heritage and instilled this pride with his children, teaching them the Italian way of life. He was a wonderful caring and loving person towards his family and friends. He will greatly be missed by all those who knew him. Joseph leaves behind his wife, Dorothy L Beninati, 3 daughters Denise M Cunningham of Marlboro, Joanne A Arnold and fiance’ Don Meewes of Grayson, Ga, Debra L Racine and husband Herbert S Racine Sr of Shirley; a brother Dominic Beninati and wife Jean of Mattapoisett; a sister Catherine M Gomes of Bridgewater; grandchildren, Patrick J Steen Jr and wife Karen of Hudson, Ma, Brenda L Steen of Ayer, Susan R Doyle and husband Steve of Marlboro, Ma, William Tobin, Bernice Hall of Marlboro, Ma, David Cunningham of Marlboro,Ma, Seth W Glenn of Ohio. In addition, he leaves behind 7 great-grandchildren and 3 great great- grandchildren. He also leaves behind three step-sons, Steven Moore, Robert Moore and Matthew Moore, all of Florida. He was the father of the late Nancy L. Glenn of Georgia, brother of the late Anthony Beninati, Albert F. Beninati, Sr., Angelina McCann and the grandfather of the late Daniel Allan Steen, Sr. Due to the current restrictions on gatherings funeral arrangements are pending. Please continue to refer to this site as updates will be posted as they become available. The Anderson Funeral Home, 25 Fitchburg Rd., Ayer is assisting the family with arrangements.

The family of Joseph J. "Joe" Beninati created this Life Tributes page to make it easy to share your memories.

Send flowers to the Beninati family.