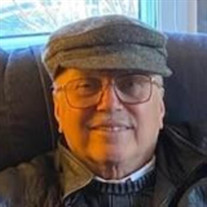 SHIRLEY: Jonathan Halkett Stowell, 74, longtime resident of Shirley, and native son of West Bethel and Andover, ME, died July 18, 2020 at home in the care of his family, due to complications resulting from Agent Orange exposure. Jonny was born in Rumford, Maine on Oct. 20, 1945 to George P. and Harriett Swift Stowell, the 7th of 12 children. He graduated from Gould Academy in 1964 before enlisting in the US Army in 1966. He took his basic training in Fort Campbell, Kentucky, completed finance training in Fort Knox, KY, and then was assigned to Fort Gordon, GA. He married Rowena Gilbert, daughter of Arthur and Ruth Gilbert, on September 23, 1967 in West Bethel and was subsequently deployed with the 1st Logistical Command, stationed in Danang, Vietnam, from March 1968 to March 1969. After completing his tour in Vietnam, Jonny was assigned to the 101st Finance Division at Fort Devens, MA where he served as a pay distribution specialist prior to his honorable discharge in November, 1969. He and Renie lived in Ayer, for 5 years before moving to their new home in Shirley in April of 1974. Jon worked hard his entire life. As a boy, he worked on the Edmund Smith farm in West Bethel and later in logging operations with Arthur Head. He worked for San-Vel Corporation in Littleton, MA for 20 years and Bemis Associates, Inc. in Shirley for 17 years before retiring in 2009. Never to sit idle, Jon had multiple interests and hobbies. He enjoyed gardening and using his tractor; his yard was meticulous. He also had a special interest in history and genealogy and completed extensive research on the Stowell, Swift, and Gilbert families. Jonny had a keen memory for family historical events, and willingly shared his knowledge with others. He was a current member of the Woodstock, Greenwood, Bethel, Dixfield, and Shirley Historical Societies. He maintained a collection of family and historical artifacts, coins, and Queen Elizabeth II memorabilia. In the last few years Jonny took a great interest in quantum physics and classic literature. Jonny loved and valued his family. He and his wife spent over 65 years together: meeting as children, becoming teenage sweethearts, and building a life that included love, humor, companionship, and devotion. They welcomed their children, Melanie and Nathan, whose arrival laid the foundation for the type of man Jonny would ultimately become: provider, teacher, steadfast, generous, and loving. He considered his in-laws as his own family, and always stayed with his second set of parents, Arthur and Ruth Gilbert, on his much beloved return trips to Maine. He was a loving brother to his large family, enjoying gatherings and capably serving as grill master. Known as “Uncle Pinchy Cheeks”, he was quick to engage children in merriment and magically produced quarters from ears. He had a special relationship with his Grand Aunt, Esther Farnum, and maintained regular visits with his Aunt Carolyn Vaughn before their respective deaths. In his retirement, he happily helped care for his grandson, Wyatt, who lovingly called him “Pa” and the best grandfather ever. He was also highly regarded by his step-grandson, Alex Cobb. Jon was especially appreciative of his family, who helped to take care of him and allowed him to remain home at the end of his life. Jon is survived by his wife of 52 years, Rowena Stowell, daughter Melanie Vermette and husband, Paul, son Nathan Stowell and wife, Caryn, grandson Wyatt and step-grandson Alex Cobb, brothers George Stowell III and wife, Mary, Michael Stowell and wife, Andrea Jean, Peter Stowell, Andrew Stowell and wife, Marlene, sisters Suzanne Bartlett, Sara Carson, Martha Stowell and husband, Ted White, Rosemary Stowell, and Rebecca Lloyd, sisters-in-law Roberta Norton and husband, Kevin, Linda Stowell, and many nieces, nephews and cousins. Jonny was predeceased by his parents, George and Harriett Stowell, brothers, William “Billy” and Brian Stowell, Renie’s parents, Arthur and Ruth Gilbert, sister-in-law Sheila Head, and brothers-in-law, Keith Bartlett and Arthur Head. Renie, Melanie, and Nathan are particularly grateful for Jonny’s sisters Martha and Rebecca for providing physical, spiritual, story-telling and musical support in their brother’s last few days. We love you very much. The family would also like to express special thanks to Jon’s good friends Norman Mullholland, whose loyalty and generosity were such a comfort, and to Gary Zeigler for his kind and invaluable support with so many practical tasks. Burial will be in the family plot at the Flat Rd. Cemetery in West Bethel, ME at a future date to be determined. He will be truly missed and never forgotten. The Anderson Funeral Home, 25 Fitchburg Rd., Ayer is assisting the family with arrangements.

SHIRLEY: Jonathan Halkett Stowell, 74, longtime resident of Shirley, and native son of West Bethel and Andover, ME, died July 18, 2020 at home in the care of his family, due to complications resulting from Agent Orange exposure. Jonny was born... View Obituary & Service Information

The family of Jonathan H. Stowell created this Life Tributes page to make it easy to share your memories.

Send flowers to the Stowell family.