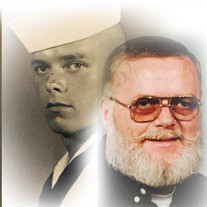 TOWNSEND- John Francis Reilly, 73, of Townsend, passed away after a long illness, Thursday evening, August 2, 2018 at his home, surrounded by his family. He was born in Fitchburg on September 18, 1944 a son of the late Thomas N. and Evelyn (Christian) Reilly. He grew up and attended schools in Fitchburg and has resided in Townsend for the past 43 years. John served in the U.S. Navy from 1962 to 1965. He was honorably discharged having attained the rank of Damage Controlman Petty Officer 3rd Class, serving aboard the USS Foley & the USS Gearing, as well as participating in the Bay of Pigs campaign. Several years ago, John worked for the former Independent Lock before going to work at the former Vogue Wallcovering where he retired as a supervisor in 2005 after many years of service. John had an excellent work ethic and was a strong family man who adored his children and grandchildren. His family wishes to extend a special thanks to Dr. Shipen Li for his compassionate and warm hearted care. John enjoyed hunting, woodworking, camping and vacationing on the Cape spending many hours on the Canal watching the boats go by. He is survived by his wife of 53 years, the love of his life, Natalie Susan (Maffeo) Reilly of Townsend; daughter Melissa Wise and her husband Robert of Leominster, daughter Jennifer Freitas of New Bedford and her son Ryan Maki of North Kingston, RI, daughter Kathryn Vignola and her husband Nathan of Leominster and their three children Vincent , Isabelle and John, daughter Erin Irons and her husband Keith of Pepperell and their children Lukas and his long-time girlfriend Alana Elliot of Ipswich, Jack, Trevor & Emma of Pepperell, and his loyal dog, Buddy. John is predeceased by brother, Patrick E. Reilly. “They lived and laughed and loved and left, and the world will never be the same. “ James Joyce A private burial with full military honors will be held in the Massachusetts Veterans Memorial Cemetery in Winchendon. There are no calling hours. The T.J. Anderson & Son Funeral Home, 250 Main St., is assisting the family with the funeral arrangements. For further information or to leave an online condolence please visit their website at www.andersonfuneral.com

TOWNSEND- John Francis Reilly, 73, of Townsend, passed away after a long illness, Thursday evening, August 2, 2018 at his home, surrounded by his family. He was born in Fitchburg on September 18, 1944 a son of the late Thomas N. and Evelyn... View Obituary & Service Information

The family of John Francis Reilly created this Life Tributes page to make it easy to share your memories.

TOWNSEND- John Francis Reilly, 73, of Townsend, passed away after...

Send flowers to the Reilly family.