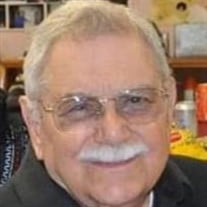 SHIRLEY: John A. Ranno, Sr., 93, a resident of Shirley for nearly fifty years, died Sunday, May 30, 2021 at Nashoba Valley Medical Center, Ayer. His wife of sixty five years, Mary A. (Addonizio) Ranno died in October 2016. John was born in Revere, June 24, 1927, a son of Aurelio and Carmela (D’Amore) Ranno and was a 1948 graduate of Revere High School. From 1945-1956 John served his country for four years in the United States Army. For nearly forty years, John and Mary were sole proprietors of their family bakery business. In 1957 they opened their bakery which became known as Anita’s Donut’s and Cakes in Belmont before relocating to Ayer in 1973, and continued to operate it until 1992. For the next sixteen years, John served as the crossing guard at the Lura A. White School in Shirley. An active member of St. Anthony’s Church in Shirley, John served as an usher and was a member of the Holy Name Society. He was a member of the Knights of Columbus 3rd Degree and was an avid Boston Red Sox Fan. He leaves three sons and daughters in law, John A. and Debbie Ranno Jr., of Pine Island, FL, Richard A. and Angelina Ranno of West Palm Beach, FL, Gary J. and Tina Ranno of Leominster; two daughters, Anita M. Perry and her husband, Charley of Leominster, Elisa R. French of Fitchburg; his daughter in law, Debra A. Ranno of Merrils Inlet, SC; a brother, Anthony Ranno of Revere; fourteen grandchildren and eleven great grandchildren. He was predeceased by his son, Dana A. J. Ranno of Shirley in 2004 and was the brother of the late Constance LaSala of Revere and the grandfather of the late Laura E. Ranno. A funeral Mass will be celebrated 10 AM Thursday, June 3, 2021 at St. Anthony’s Church, 14 Phoenix Street, Shirley. Burial will be in the parish cemetery. Mr. Ranno’s family will receive family and friends at calling hours, 4-7 PM Wednesday, June 2nd at Anderson Funeral Home, 25 Fitchburg Road, Rte. 2A Ayer. For additional information or to leave an online condolence, please visit their website at www.andersonfuneral.com. Memorial contributions may be made to Beacon of Hope, 62 West Street, Leominster, MA 01453.

The family of John A. Ranno Sr. created this Life Tributes page to make it easy to share your memories.

Send flowers to the Ranno family.