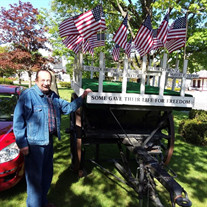 AYER- John W. Gintner, Jr., 76, of Ayer, died Sunday evening, September 20, 2020 in the Genesis Westford House. John was born in Ayer, on August 27, 1944 a son of the late, John W., Sr. and Dorothy P. (Waller) Gintner and had lived in Littleton, Ayer and most recently Shirley. He was a Vietnam Veteran having served in the U.S. Army. John retired in 2009 from San-Vel Concrete in Littleton where he worked as the scale house operator. His career spanned 39 years and included work at the Middlesex Corporation, Aggregate Industries and Bardon Trimount. He also served on the Ayer Fire Department and the Groton Police Department as a dispatcher and police officer. John was a past president of the Ayer Gun & Sportsmen’s Club, past president on the Westford Eagles, past exalted ruler and life member of the Westford Elks Lodge #189 and current member of the Chelmsford Elks Lodge #2310, charter member of the Groton Lions Club, life member of the Franco-American Club in Westford and Senior Vice-Commander of Shirley Legion Post 183. His wife, Wilma Rose (Turner) Gintner died in 1988. He leaves three step-daughters, Johnna Brissette and her husband Ray of Pepperell, Prudy Harsh of Pennsyvania and Kimberly Stuart of New Hampshire; a sister, Patricia M. MacInnis and her husband Kelvin of P.E.I., Canada; a dear friend, Shelley McClellan and her wife Kathy Gadomski; seven grandchildren, seven great- grandchildren and many nephews and nieces. He is predeceased by a step-daughter, Pammie Mayo who died in 2000, a grandson, Joe Infantino, a brother, Edward T. Gintner and a sister, Sandra Lee Colt. Calling hours will be held on Tuesday, October 6, 2020, from 4 to 7 PM in the Anderson Funeral Home, 25 Fitchburg Rd., Ayer. Burial will be in the Woodlawn Cemetery in Ayer. In lieu of flowers memorial contributions may be made to the Shirley Legion, 8 Church St., Shirley, MA 01464 For further information or to leave an online condolence please visit www.andersonfuneral.com

The family of John W. Gintner created this Life Tributes page to make it easy to share your memories.

Send flowers to the Gintner family.