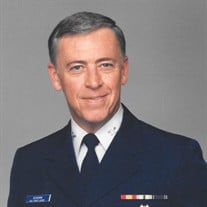 Capt. John G. Donovan, USCG Ret. TOWNSEND – John Glancy Donovan passed away peacefully on July 4, 2018 at home, surrounded by his loving family, after a short illness. He was the husband of Donna (Montville) Donovan with whom he celebrated their 33rd wedding anniversary on January 18th. John was born on May 16, 1939 in Boston, MA, son of the late John Oliver Donovan and Mary (Glancy) Donovan of Rockland, MA. John graduated from Archbishop Williams High School, Braintree, MA in 1957 and received a four year academic scholarship to Boston College where he graduated with a B.S. in Business Administration in 1961. John immediately joined the United States Coast Guard and was commissioned as an Ensign where he served on active duty for four years. He was initially assigned to the U.S. Coast Guard cutter, Hornbeam, stationed in Woods Hole, MA. Upon his retirement from active duty, he began work for the Gillette Company in 1965 until his retirement in 2001. At Gillette, John had several duties including managing the distribution of Gillette’s products around the globe. While at Gillette, he continued his career with the Coast Guard, serving in the reserves for 33 years, finally retiring in 1999 with the rank of Captain. On December 27, 1954, John, at the age of 15, and his friends were involved with the rescue of a 12 year old girl, Sylvia Monk, who had fallen through the ice while ice skating at Furnace Pond in Pembroke, MA. He received a commendation from the Humane Society of the Commonwealth of Massachusetts for bravery in saving a life. In the summer of 1958, at the age of 19, John and his friend John Ransom of Rockland, MA, rescued William Bunar of Brockton, MA off Blackman’s Point in Marshfield, MA when his motor boat capsized 300 yards off shore. John was an avid outdoorsman and enjoyed scuba diving, canoeing, camping, fishing and hunting pheasant and woodcock with his English Springer and English Cocker Spaniels. Earlier in his life, he took several canoe trips along the Allagash and Moose rivers in northern, Maine and more recently traveled to England for upland hunting expeditions. He was an active member of the Timberdoodle Club in Temple, NH. John is survived by his loving wife Donna, her sisters Mary Lamport, Robin Montville, brother William Montville and their families, his three children, Michael G. Donovan and his wife Gina of Ashland, MA; Susan J. Donovan of Billerica, MA and Patricia D. Childs and her husband Greg of Bolton, MA and his brother Robert Glancy Donovan of Plymouth, MA. He is also survived by five grandchildren, Kaleigh, Jack and Shea Donovan and Annie and Will Childs; two nieces, Christine McDougal, Erin Donovan and nephew, Sean Donovan. His funeral Mass will be celebrated on Wednesday, July 11, 2018; at 11 AM in St. John the Evangelist Church, 1 School St., Townsend. Burial with full military honors will be held privately in the Massachusetts Veteran Memorial Cemetery in Winchendon. There are no calling hours. In lieu of flowers memorial contributions may be made to CoastGuard Mutual Assistance, PO Box 55928, Boston, MA 02241-8001.

Capt. John G. Donovan, USCG Ret. TOWNSEND &#8211; John Glancy Donovan passed away peacefully on July 4, 2018 at home, surrounded by his loving family, after a short illness. He was the husband of Donna (Montville) Donovan with whom he celebrated... View Obituary & Service Information

The family of Capt. John G. Donovan, USCG Ret. created this Life Tributes page to make it easy to share your memories.