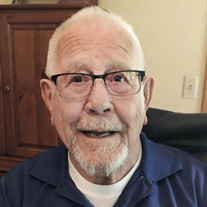 FITCHBURG & Ocala, FL: John P. Deshayes, 91, of Fitchburg, passed away peacefully on Wednesday, May 19, 2021 at University of Massachusetts Medical Center, Worcester, after being treated for a brief illness. His wife of 61 years, Irene E. (Bourgault) Deshayes, predeceased him in March of 2013. Mr. Deshayes was born in Lacolle, Quebec, Canada, on February 3, 1930, one of ten children born to Wilfred A. and Bertha (Boulerice) Deshaies, and moved to Leominster in the late 1930’s. He and his wife, Irene, were married at St. Joseph Church of Fitchburg in 1952, and lived in Fitchburg before moving to Ocala, Florida in 1995 where they resided together for nearly twenty years. From 1947 to 1950, Mr. Deshayes served his country in the United States Army, attaining Private First Class and also was a paratrooper. Mr. Deshayes was a member of St. Joseph’s Parish and Madonna of the Holy Rosary Church in Fitchburg. He enjoyed golfing and was a former member of the City of Gardner Municipal Golf Course. He was also a member of bowling leagues while in Ocala, and enjoyed playing cards. For most of his career, Mr. Deshayes worked as truck driver and construction worker over the years, including Fairway Construction in Fitchburg, O’Leary Transportation and F&H Trucking both in Worcester. He also worked on the I-190 project as a heavy equipment dump truck operator, then at Star Container in Leominster, and retired at age 62 as a member of the New England Teamsters. Mr. Deshayes leaves two sons, Steven R. Deshayes of Ashburnham, John G. Deshayes of Shrewsbury; four daughters, Debra A. Croteau of Lunenburg, Patricia A. Maguy of Fitchburg, Karen A. King of Ashburn, VA, and Michelle A. LeBlanc of Buford, GA. He also leaves a sister, Ginger Kolb of Goffstown, NH; thirteen grandchildren and fourteen great grandchildren. He was the father of the late Richard L. Deshayes of Fitchburg who died in 1980, was the brother of the late Henry Deshaies, Cecile Gordon, George Deshaies, twins, Louise Nelson and Louis Deshaies, Julie Cross, Albert Deshaies and Carmen Deshaies. Services will be private per request of the family. If you wish, you may leave an online condolence at www.andersonfuneral.com. As a thank you to all the EMT’s, Paramedics, Doctors, Nurses and other emergency and health care workers, that assisted Mr. Deshayes over the past few years, the family asks that in lieu of flowers, Memorial contributions be made to the Tunnel to Towers Foundation, at https://t2t.org. Our sincerest thanks.

FITCHBURG & Ocala, FL: John P. Deshayes, 91, of Fitchburg, passed away peacefully on Wednesday, May 19, 2021 at University of Massachusetts Medical Center, Worcester, after being treated for a brief illness. His wife of 61 years, Irene E. (Bourgault)... View Obituary & Service Information

The family of John P. Deshayes created this Life Tributes page to make it easy to share your memories.

Send flowers to the Deshayes family.