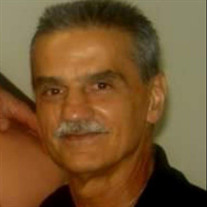 John Achilles Capsalis 73, passed away unexpectedly on October 31st 2021 at his residence in Ocala Florida. Born in Lowell Massachusetts, he was the son of the late James Capsalis and Cornelia (Patterson) Capsalis Giles. John worked for Honeywell Inc. for over 20 years as an auditor in investigation and analysis. John was also part owner of the Whippet Pub in Lawrence. After relocating to Fl, he pursued his passion for law enforcement and became a corrections officer for the state of FL. and a member of the SWAT team. He was also a Martial arts instructor for Punta Gorda and Charlotte County FL. He served as a road patrol Deputy Sheriff for Punta Gorda FL. and also worked in special assignments for the internal revenue. His responsibilities there included detecting and reporting criminal acts. He retired In Law enforcement as a Florida Deputy for Punta Gorda FL. John was a great friend. Anyone who knew him would say he was an amazing man who would do anything for family or friend, and most anyone who knew him was his friend. He was trustworthy, honest and dedicated to everything he did. John enjoyed morning coffee rides with friends and watching the football game. He also had the ability to light up the room with his infectious laugh and his incredible sense of humor, always leaving those in his company with a smile. He loved sports, especially football and boxing and he himself fought for the Golden Gloves while in his early 20’s in Lowell MA. John always took pride in his appearance and dedication to keeping his body in shape by working out daily. That and his hobby for pristine detailing of his sports cars kept him busy. But most importantly, John was a devoted and loving family man; He looked forward to talking with his Daughter Melanie and Grandchildren every Sunday and would often offer words of inspiration, encouragement and wisdom. They also looked forward to getting his letters expressing freely his love for each of them. John will be sorely missed by all who knew and loved him. John is survived by his Daughter Melanie Capsalis, future Son-in-law Jon Drouin; four grandchildren, Logan Taschereau, Ava, Isabel and Sofia Drouin all of Windham NH; his brother, James Capsalis and his wife Patty of Townsend, MA; his half-sister, Sheryl Pelham of Dracut, MA; his sister-in-law, Nancy Capsalis; nephews, Johnny Capsalis, James Capsalis, Michael Capsalis, Corey Capsalis, Kyle Capsalis and nieces, Kailey Capsalis and Kim Page. He will be deeply missed by many cousins and his close and dear friends, Darlene Capsalis, Alex Massina, Grace Lynch, Dennis, Barbara Tautenhan and so many more. Along with his parents, John was predeceased by his late brother, Paul Capsalis. A Memorial service for John will be held on Saturday, February 12, at 11AM in the T.J. Anderson & Son Funeral Home, 250 Main St., Townsend, MA followed by a burial in the Hillside Cemetery on Highland St., Townsend, MA.

John Achilles Capsalis 73, passed away unexpectedly on October 31st 2021 at his residence in Ocala Florida. Born in Lowell Massachusetts, he was the son of the late James Capsalis and Cornelia (Patterson) Capsalis Giles. John worked for... View Obituary & Service Information

“Goodbyes are not forever, are not the end; it simply means ‘I’ll miss you,’ until we meet again. I love you Dad.

Send flowers to the Capsalis family.