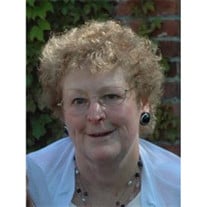 She is survived by her son, Paul Sturges, Jr. of Fitchburg and her daughter and son-in-law, Kimberly and Michael Earley of Lancaster. Janet cherished her only grandchild, Olivia. Janet was born and raised in Chelsea, the daughter of the late Benjamin J. and Jeannette I. (Labbe) Richard. Janet was one of seventeen children. She leaves her sisters Joann Richard, Linda Riley, Annette Purcell, Elaine Patty, and Barbara Richard. In addition, she leaves her brothers Arnold Richard, Ernest Richard, Wayne Richard, and Edward Richard. Janet was also a proud aunt to many nieces and nephews. She was predeceased by her brothers Benjamin J. Richard II, Robert Richard, Frank Richard, and Leonard Richard, Joseph Richard as well as two sisters, Carolyn Richard and Suzette Leblanc. After many years at home with her children, Janet worked as a seamstress until she became an administrative assistant in 1984 at MCI Shirley. She earned an Associates Degree in Criminal Justice from Mount Wachusett Community College. With hard work and determination, she rose to the position of Parole Officer at the Souza Baranowski Correctional Facility. Janet was known for her empathy and compassion, which she shared with everyone she encountered. She retired in 2012 because of her illness. Janet spent much of her life caring for her children. She volunteered in their classrooms and scouting activities. She continued these activities when she became a grandmother to Olivia. As a Mémé, she enjoyed taking Olivia to Friendly's, reading to her, and watching her dance. Throughout her life, Janet was an avid reader and gardener. She loved being outdoors camping and kayaking with her best friend, Joyce Kaulback. Her summer vacations in Ogunquit, Maine, included daily walks on The Marginal Way. She was a remarkable seamstress, making doll clothes and clothing for her children. Many of the children in her family were welcomed into the world with a sweater Janet knitted by hand. Later in life, Janet spent her Friday nights swing dancing with a group of friends. Janet’s children would like to thank the caregivers at Leominster Crossings and Brookhaven Hospice for their compassionate care of their mother during the last three years of her life. She lived her final years with dignity because of the people who cared for her.

She is survived by her son, Paul Sturges, Jr. of Fitchburg and her daughter and son-in-law, Kimberly and Michael Earley of Lancaster. Janet cherished her only grandchild, Olivia. Janet was born and raised in Chelsea, the daughter of the late... View Obituary & Service Information

The family of Janet Rose (Richard) Sturges created this Life Tributes page to make it easy to share your memories.

She is survived by her son, Paul Sturges, Jr. of Fitchburg and...

Send flowers to the Sturges family.