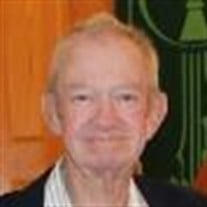 Ayer: James M. Horgan, 77, of Ayer, died Saturday evening, December 15, 2018 at his home. Jim was born in Ayer on December 21, 1940 and was the youngest of nine children born to Charles and Anna (Feeney) Horgan and was a lifelong resident of Ayer. Jim graduated from Country Day School in Groton and Notre Dame High School in Fitchburg in 1959. Upon graduation of high school, he attended Worcester Industrial Technical Institute and received a diploma in Drafting & Tool Design in 1962. Jim served his country as a member of the United States Navy and was stationed on the USS Shangri-La from 1962 through 1964 and continued as a reservist until 1967. Jim worked as a central office technician with New England Telephone & Telegraph beginning in 1965. He continued to work in a career that he loved for over forty years, retiring from Verizon in 2005. After retirement, he spent time traveling throughout Europe as well as the United States with his wife, Carol. He was enthusiastic about antiquing and flea marketing and most especially enjoyed restoring furniture. To family and friends, he was known as a “Jack of All Trades” as no project was too big or too small. He leaves his loving wife and best friend of eighteen years, Carol (Marsolais) Horgan a son, Daniel Horgan of Ayer; two daughters, Nancy Charbonneau of Lunenburg and Katy Perales of Nantucket; two stepdaughters, Candice Hyde of Weare, NH and Theresa Carpenter of Groton; four grandchildren, Myles Charbonneau, Savannah Carpenter, Jonas Carpenter and Liam Perales; two brothers, Philip Horgan and John Horgan both of Ayer as well as over forty nieces and nephews. He is predeceased by Helen Poitras, Mary Cote, Ruth Hederson, Charles Horgan, Edna Dowey and Thomas Horgan Jim was a humble, loyal man that loved his family, friends and his community of Ayer. He was a communicant of St. Mary’s Church and for many years taught in the CCD program. He was a former member of the Knights of Columbus and served many hours on the Ayer Zoning Board. He was an avid bowler and a member of the bowling leagues at Harvard Lanes. Since a young age, he began playing hockey on Schoolhouse Pond and continued playing well into his fifties in a men’s league in Groton. He also enjoyed fishing, reading and telling jokes to anyone he met. A mass of Christian burial will be 11 AM Thursday, December 20th at St. Mary’s Church, 31 Shirley Street, Ayer. Burial will be in the parish cemetery. Calling hours are 4-7 Wednesday at the Anderson Funeral Home, 25 Fitchburg Rd., Ayer. Please see www.andersonfuneral.com for additional information or to leave an on line condolence.

Ayer: James M. Horgan, 77, of Ayer, died Saturday evening, December 15, 2018 at his home. Jim was born in Ayer on December 21, 1940 and was the youngest of nine children born to Charles and Anna (Feeney) Horgan and was a lifelong resident of... View Obituary & Service Information

The family of James M. Horgan created this Life Tributes page to make it easy to share your memories.

Send flowers to the Horgan family.