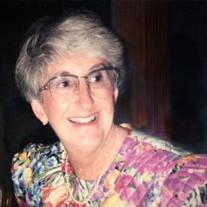 She married Charles E. Dumont, of Fitchburg in 1957 and they remained devoted to each other until his death in May 1987. Mrs. Dumont was born in Fitchburg on April 28,1927, a daughter of Dr. Antonio and Eva (Véronneau) DeLisle and resided many years in Fitchburg before moving to Leominster 28 years ago. She graduated from St. Ann’s Academy in Marlboro and from Anna Maria College in Paxton. She was a certified laboratory technician and before her retirement, she worked many years as the Supervisor of the Leominster Hospital Blood Bank. She was an active member of Our Lady Of The Lake Church in Leominster and contributed as a member of the choir there. She was a former longtime member of St. Joseph’s Church in Fitchburg. Throughout her adulthood, she was a member of Beta Sigma Phi International, a social and cultural sorority, where she formed many close friendships. She enjoyed reading and traveling and was especially fond of being a mom to her children and their spouses, being a grandmother to her grandchildren and their spouses, and spending time with her extended family, including many relatives in Canada, primarily in Quebec. She leaves three sons and daughters in law, Charles E. and Diane Dumont, Philip D. and Janice Dumont, all of Pepperell, and Paul R. and Michelle Dumont of St. Charles, Missouri; two daughters, Marie C. Dumont of Leominster, Lise M. Dumont and her husband, Graham Douglas of Brisbane, California; a brother, Dr. Gerald DeLisle, D.M.D. of Newburyport; two sisters, Louise Fortin of Townsend, Lucie Hastings of Lunenburg; eight grandchildren, Daniel Dumont, Susan Harmon, Mary Pelletier, Jeremy Dumont, Nicholas Dumont, Michael Dumont, Michael Nieder, Melissa Nieder; and a great-grandson, Cameron Nieder. She was the sister of the late Dr. Paul DeLisle, D.M.D. of Leominster.

She married Charles E. Dumont, of Fitchburg in 1957 and they remained devoted to each other until his death in May 1987. Mrs. Dumont was born in Fitchburg on April 28,1927, a daughter of Dr. Antonio and Eva (V&#233;ronneau) DeLisle and resided... View Obituary & Service Information

The family of Jacqueline L. (DeLisle) Dumont created this Life Tributes page to make it easy to share your memories.

Send flowers to the Dumont family.