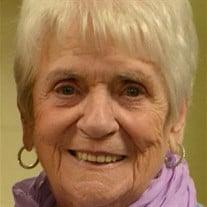 LUNENBURG-Isabel Clare (Markey) Gallagher, 89, formerly of Lunenburg, died Friday evening, June 7, 2019 Isabel was born January 22, 1930 in Lawrence, MA, the daughter of William and Helen "Ellen" (Stevenson) Markey and younger sister to Bill. Growing up on Prospect Hill in Lawrence, Isabel attended St Mary’s High School where she developed life-long friendships and met her future husband. But not before blazing trails. Upon graduating high school, Isabel became one of the first woman to attend Boston College when, at just 17 years old, she was accepted into a baccalaureate program for nursing with 25 other young women. Graduating in 1952 with a BSRN from BC’s nursing program, Isabel worked in labor & delivery and maternity and taught obstetrics at Lawrence Memorial Hospital in Medford and Mass Memorial Hospital in the South End. She also worked as a Visiting Nurse in the South End of Boston, where every baby born was seen by a nurse in their first month. Isabel and Frank met in high school - running in the same crowd and were married in Lawrence on August 24, 1957. They were married 52 years until his death in January 2010. Through the years, the Gallaghers enjoyed living in parts of the US; Peoria, IL, Kittanning, PA and Huntington, WV before returning home to Massachusetts in 1973 and calling Lunenburg home. Isabel lovingly raised 4 children, attending every school and sporting event, volunteering, teaching religious education, and when her children were approaching college age, returned to nursing. Dedicating nearly twenty more years to caring for others in the field she loved. After introducing thousands of babies to their new parents, Isabel retired from the former Leominster Hospital Labor & Delivery Department in 1996. Always at her husband’s side for many United Way events too numerous to name, Isabel was also active as a member of Newcomer’s Club, serving as a Brownie and Girl Scout Troop Leader, answering the Suicide Prevention Hotline, and serving on the Lunenburg Council on Aging, to name a few. Isabel was a member of St. Boniface Parish for 46 years and a member of the Women’s Guild, she taught religious education and for many years she and Frank were greeters at the 8 o’clock Mass. Isabel loved spending summers with her family at “camp” in Derry, NH. She loved reading, crossword puzzles, cribbage, slow boat rides around the lake, jigsaw puzzles, watching her children and grandchildren enjoy Big Island, traveling to the west coast, and taking an occasional cruise. She had a song ready to sing, a constant smile, was always ready for a good laugh and typically cracked herself up! Isabel is survived by her children: F. Michael Gallagher and his wife Patricia of Sunnyvale, CA and daughters Erin and Audrey; Denis Gallagher and his wife Katherine of Danvers, MA; Patricia and her husband Charles Griffin of Ashby and daughter Brigid, and Jane Gallagher and her children Gabrielle and Michael of Lunenburg, and Liam and his wife Lorraine of Ashburnham their son and Isabel’s great-grandson Clint; many nieces and nephews. Isabel is predeceased by her husband Frank, her infant son Joseph and her brother William Markey of Dallas, TX. Her funeral Mass will be celebrated on Wednesday, June 12, at 10 AM in St. Boniface Church, 817 Massachusetts Ave., Lunenburg. Burial will be in the Holy Sepulchre Cemetery in North Andover. Calling hours will be held on Tuesday, June 11, from 4 to 7 PM in the Anderson Funeral Home, 25 Fitchburg Rd. (Rte. 2A), Ayer.

The family of Isabel Clare (Markey) Gallagher created this Life Tributes page to make it easy to share your memories.

Send flowers to the Gallagher family.