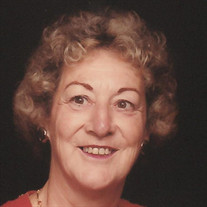 TOWNSEND; Irene E. (Cote) Johnson, 93, of Townsend MA, died Saturday, May 2, 2020 at The Highlands in Fitchburg MA. Mrs. Johnson was born in Fitchburg on August 19, 1926, a daughter of Joseph G. and Mary F. (Fleurant) Cote. Her husband, Roy E. Johnson, died in October 2002. Irene lived in Townsend for over 70 years and was very active within the community. She was a resident at The Highlands since 2016 where she frequently volunteered to work at the giftshop and never passed up an opportunity to play bingo. She attended Immaculate Conception Elementary School and St. Bernard’s Central Catholic High School, both in Fitchburg. For fifteen years, Mrs. Johnson worked in the processing department at New England Business Company in Townsend and Groton, retiring in 1990. Prior to that she had worked at Foster Grant Company in Leominster, General Electric in Fitchburg, Grant Plastics in Townsend and in the cafeteria at North Middlesex Regional High School in Townsend. Mrs. Johnson and her husband opened and provided a home to foster children for many years. She was a longtime member of St. John’s Church in Townsend as well as the Townsend American Legion Auxiliary, Townsend VFW Auxiliary and Ashby VFW Auxiliary. She served as a Hospice volunteer, CNA and companion in the Nashua, NH and Lowell areas. She leaves a daughter in law Berit A. Johnson of Barre, and a son in law Robert P. LaPorte Jr. of Chelmsford. One granddaughter, Jodi M. Beaupre and her husband Andre G. Beaupre of Barre. Four grandsons, Timothy M. Johnson of Florida, Benjamin M. Johnson of Barre, Joseph R. LaPorte of Florida, Thomas E. R. LaPorte and his partner Ashley Angier of Vermont. Six great grandchildren, Colin Beaupre, Ahnissa Beaupre, Riley Beaupre, Greta Johnson, Maggie Johnson, and Ariah CynthiaRae LaPorte. She also leaves a sister in law Beverly Johnson and several nieces and nephews. She was predeceased by her daughter, CynthiaRae M. LaPorte of Chelmsford in 1992, and her son, Bruce E. Johnson of Barre in 2019. Her brother, Albert E. Cote of Lunenburg and two sisters, Yvette C. LeBlanc of Fitchburg and Gloria L. Fournier of Gardner. Funeral arrangements are pending. The Anderson Funeral Home, 250 Main Street, Townsend Center is assisting the family with arrangements. Please see www.andersonfuneral.com for additional information or to leave an on line condolence.

The family of Irene E. Johnson created this Life Tributes page to make it easy to share your memories.