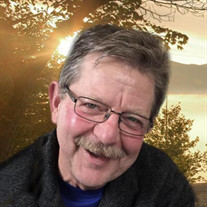 GARDNER: Henry N. "Hank" Harris, 67 of Gardner, passed away at home on Thursday, February 25, 2021 with his family by his side after a heroic 18 month battle with brain cancer. Born in Laconia, New Hampshire on October 25, 1953, Henry was one of seven siblings, born to Dorothy (Gilman) Harris, and the late Henry Blunden. Henry graduated high school from Lunenburg High. He worked for the Massachusetts Department of Corrections for 20 plus years, served as a union steward and was elected Executive Secretary Of the Massachusetts Correction Officers Federated Union for 8 years where he fought tirelessly for worker's rights. Henry was an avid adventurer who enjoyed exploring the great outdoors and sharing his love for the natural world with his children and grandchildren. He was a skilled golfer and enjoyed meeting new people and made long lasting friendships through the game he so loved! Henry is survived by his sons, Miles Harris, and his wife Sarah of Marlborough NH, Christopher Harris and his partner Cassandra Doyle of Lunenburg, and Ryan Harris of Lunenburg; his former wife, Joanne L. (Haase) Harris of Lunenburg; his siblings, Stephen Moore of Laconia, Lori Montalvo of Clayton NC, Jacqueline Harris of Athol, and John Harris of Clayton NC; brothers-in-law, Donald Haase and Stephen Haase; Alwin Haase and wife Gigi Haase; grandchildren, Jenna, Chloe, Sienna, Madison and Cali. Henry was predeceased by his brother, Jefferey Moore, and his sister, Bonnie McIntosh. A Celebration of Henry’s life will be held privately by his family. In lieu of flowers, donations may be made in Henry’s memory to Dana Farber and The Massachusetts Audubon Society. Arrangements are under the direction of Anderson Family Funeral Homes, 25 Fitchburg Road, Ayer. To leave an online condolence, please visit Henry’s Tribute Wall at www.andersonfuneral.com.

GARDNER: Henry N. "Hank" Harris, 67 of Gardner, passed away at home on Thursday, February 25, 2021 with his family by his side after a heroic 18 month battle with brain cancer. Born in Laconia, New Hampshire on October 25, 1953, Henry was... View Obituary & Service Information

The family of Henry N. "Hank" Harris created this Life Tributes page to make it easy to share your memories.

Send flowers to the Harris family.