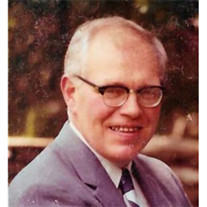 George Gerhart Schwenk, 85, of Mason, was summoned by the Great Scout Master in the Sky to his last campout on August 7, 2017. While driving through bucolic Mason in 1973, he thought, “I didn’t think they made towns like this anymore.” He purchased land, and jump-started Mason Boy Scout Troop 264 where he served as Scout Master until 1989. At one point, every boy in Mason was a scout. George was a lifelong Boy Scout, starting as a youngster in Troop 3 in Boyertown, PA. He volunteered at Scout District and Council activities, in addition to several National and World Jamborees. He earned his Eagle Scout rank and was the recipient of the Silver Beaver Award, the highest award in scouting, for more than 70 years of involvement with the Boy Scouts. In 1954 he received his Bachelors degree in physics from the Massachusetts Institute of Technology (MIT), then a Masters degree in physics from the University of California Berkeley. George was a veteran of the Korean War where he served as a crypto analyst. After departing active duty and entering the reserve component, George served in increasing levels of responsibility in numerous Army Security Agency Units in California, Michigan and Massachusetts. He commanded several sensitive military intelligence activities whose missions focused on information technology and later, on technical strategic intelligence. A graduate of the Army War College, George’s service culminated within the Office of the Assistant Chief of Staff for Intelligence, Department of the Army, where he served as the Deputy Director for Foreign Intelligence before retiring at the rank of Colonel in 1984. George and Mort Goulder (of Hollis, NH) were founders of The Breakfast Club of New Hampshire, a group of angel investors who made investments in start-up and early-stage companies located around southern NH and northern MA. George invested in many of these companies, and on occasion would also join their board of directors or become an ad hoc advisor or mentor. He was well rounded in the operational aspects of these companies, but really shined in financial analysis and could spot something amiss from a mile away. In 1990 Inc. magazine named him Entrepreneur of the Year. With another Breakfast Club member, Dick Morley, George cofounded several companies, including Bedford Associates in Bedford, MA, and Modicon, Inc. (where George named the company and served as treasurer) in Andover, MA. He was also an enrolled agent for the IRS. George was very active in Mason town affairs where he was elected as Town Auditor and Trustee of the Trust Funds for many years. He and his wife, Catherine, donated sizable properties to the town, including the old McDonald quarry, for permanent conservation. He was a member of the Mason Congregational Church, the Major Henry Knox Masonic Lodge and the Appalachian Mountain Club, with whom he summited all of New England’s 4,000-foot peaks. George was born in West Reading, PA, on March 12, 1932, son of the late Wayland G. and Elva B. (Gerhart) Schwenk and has resided in Mason since 1979. He leaves behind his wife, Catherine Schwenk, of Mason; and a brother, Carl G. Schwenk, of Ridgeway, CO.

The family of George Gerhart Schwenk created this Life Tributes page to make it easy to share your memories.

George Gerhart Schwenk, 85, of Mason, was summoned by the Great...

Send flowers to the Schwenk family.