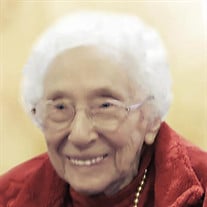 SHIRLEY: Genevieve V. (Wesolowski) Kacmarczyk, 104, formerly of Benjamin Road, Shirley, died peacefully in her sleep on Wednesday April 22nd at Nashoba Park Assisted Living, Ayer. Genevieve was born in Shirley on December 22, 1915, to Wojciech and Rozalyia (Goɬas) Wesolowski. She lived most of her life in Shirley and later resided in assisted living communities in Acton and Ayer. She was educated in the Shirley school system and graduated from Fitchburg High School in 1933. She attended the University of Vermont as a first-generation college student, graduating in 1939 with a Bachelor of Science degree. Throughout her post-graduate career, she also received certificates in high school teaching from the Vermont State Board of Education, general laboratory technique from Worcester City Hospital Department of Pathology, and funeral directing from the New England Institute of Anatomy, Sanitary Science, Embalming, and Funeral Directing. Genevieve began her career at the Community Memorial Hospital in Ayer before going to work at the former Fort Devens Army base where, as a civilian employee, she attained the level of Head Biochemist. With Doctor Merino Vidoli, she was instrumental in organizing and performing the newly discovered Rh Blood factor at the Lowell General Blood Bank. During World War II, she continued her significant role at Fort Devens on the home front while also advocating on behalf of others. After her aunt Anna lost two of her four sons during the war, Genevieve wrote to President Franklin Delano Roosevelt, who wrote back with a very poignant letter of sympathy. In 1953, when Genevieve became a licensed as an embalmer and funeral director in the State of Massachusetts, she was one of the first three women in Massachusetts to receive a funeral director license. In 1956, she and her husband, Joe, went on to build, open and operate the Shirley Funeral Home in Shirley, where they served the community for 50 years. Genevieve was a lifelong member of St. Anthony’s Padua Church in Shirley, as well as a Eucharistic minister and a member of its Ladies Sodality. She was also part of the American Society of Clinical Pathologists and a member of both the National and Massachusetts Funeral Directors Association. After retiring at age 90, Genevieve went on to live at The Inn at Robbins Brook in Acton and finally Nashoba Park Assisted Living in Ayer. Genevieve has a special connection to Nashoba Park because the building is a renovation of the Community Memorial Hospital, where she held her first job. She enjoyed hobbies such as water coloring painting, bird watching, crocheting, and making lifelong friends with other residents and staff. Genevieve celebrated many milestones with her family and the community, including her 100th birthday when she received a congratulatory letter from President Barack Obama and Michelle Obama on her life’s accomplishments. Genevieve was also very proud of her Polish heritage and her parents’ immigration story, so she hand wrote seven journals recounting family history to pass on to her relatives. Her first language was Polish, which she was able to speak, read, and write fluently. Her parents had been self-taught in Polish, and Genevieve learned English when she started public school. As an adult, she wrote and translated letters on behalf of friends who had family in Poland. She was also able to visit her own parents’ hometowns in Poland, which meant a great deal to her. Genevieve will be remembered not only by her accomplishments but also by her kindhearted and spirited personality. She was wise, humble, and hardworking. A true testament to how she lived her life, Genevieve’s 1933 high school yearbook quote read, “Nothing is impossible to a willing heart” (John Heywood). She was predeceased by her husband, Joseph Kacmarczyk, in 2003. She was the sister of the late Laura McCarthy of Newton Lower Falls, Matthew Wesolowski of Baldwinville, and Sigmund Wesolowski of Shirley. She is survived by several nieces and a nephew, including Rosemary Cella of Leominster, Robert McCarthy of Mansfield, Sally Oksanish of Westminster, Joan and Hayle Wesolowski of Brattleboro VT, Diana Wesolowski of Northampton, Mary Golia of Verona NJ, and Lisa Furnivall of Daniel Island, SC. She was predeceased by her nephew William Wesolowski of Bainbridge Island, WA in 2001. She was dearly loved by her nieces and nephews and grand-nieces and grand-nephews. She was their Cioci (Aunt) Genevieve. Genevieve will be lovingly remembered by her family, assisted living community, and dear friends. Due to COVID-19, burial will be private. A mass to celebrate Genevieve’s life will be scheduled for a later date. For any donations in Genevieve’s memory, please donate to Nashoba Park Assisted Living, 15 Winthop Ave. Ayer, MA 01432 to support community activities and resident life. The Anderson Funeral Home, 25 Fitchburg Rd., Ayer is assisting the family with arrangements. For additional information or to leave an online condolence please visit their website at www.andersonfuneral.com. The Anderson Funeral Home, 25 Fitchburg Rd., Ayer is assisting the family with arrangements. For additional information or to leave an online condolence please visit their website at www.andersonfuneral.com.

The family of Genevieve V. Kaczmarczyk created this Life Tributes page to make it easy to share your memories.

Send flowers to the Kaczmarczyk family.