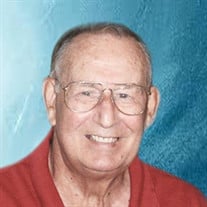 TOWNSEND0-Frederick J. Darling, Sr. died February 10, 2020 at Solaris Healthcare of Port Charlotte after a long and valiant battle. He was born in Woburn, MA, December 24, 1933 to Frederick C. Darling and Doris Lasalle Darling. He graduated from Woburn High School in 1951. Fred served in the Air Force during the Korean War. He was married to Josephine Christofero Darling for 68 years. A curious and hardworking person, Fred wore many hats throughout his life, one being that he was a police officer in Ayer, MA. He owned and operated a gun store. He also owned and operated a metal finishing and printed circuit manufacturing business for 28 years. Fred enjoyed hunting and the outdoors and belonged to many sports clubs and was one of the earliest members of Safari Club International, an organization active in the conservation of wildlife worldwide. He was also a champion skeet shooter. After retirement, Fred served as a selectman in Townsend, MA for two terms. In recent years, Fred donated a large parcel of land in Townsend, Massachusetts to Massachusetts Wildlife Management to provide a portion for a migration corridor for wildlife. Fred was a passionate animal lover and rescued and cared for many pets over his lifetime. He has made Port Charlotte his home since 2007. Fred is survived by his wife Josephine. He is also survived by his sons Frederick J. Darling, Jr. and David Darling and his wife Judy, both of Townsend, MA. His daughter Angela Wilde and husband Allen of Littleton, Massachusetts. Fred has five grandchildren, Bradford Wilde, Christopher Darling, Katie Darling, Michael Peppard. Jr. and John Fred Peppard. Fred leaves sisters Carolyn Cummings and Norma Darling. He is predeceased by his daughter Doris Peppard and his sister Martha Downes. He also leaves his beloved dog Muffie. A graveside service will be held at Hillside Cemetery, Townsend, MA at 11:30 am on July 25, 2020. The Anderson Funeral home, 250 Main Street, Townsend, is assisting the family with arrangements. For additional information or to leave an online condolence, please visit their website at www.andesonfuneral.com.

The family of Frederick J. Darling, Sr created this Life Tributes page to make it easy to share your memories.