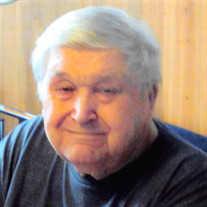 FITCHBURG - Frank A. Michelson, 84 of Fitchburg, passed away surrounded by his family on Friday, December 10, 2021. Born and raised in Fitzwilliam, NH on March 26, 1937, Frank was one of five children, born to the late Walter L. and Selma L. (Waino) Michelson. After starting his family, Frank moved to Fitchburg where he has resided since the early 1960’s. An avid sportsman, Frank loved auto racing and drove race cars in his youth. He also enjoyed playing baseball and football. Frank will always be remembered for his loveable personality. He was always smiling and loved talking with everyone. He cherished his whole family unconditionally and will forever be missed. In addition to his parents, Frank was predeceased by his daughter, Julie Rochon; his sister, Dorothy Moore; his brothers, Kenny Michelson, and an infant brother; his brother-in-law, Ed Baker. Frank is survived by his wife, Joan M. (Strearns) Michelson; his sons, Kevin Ouellette and his wife Linda of Fitchburg, and Steven Ouellette, and his wife Cheryle of Fitchburg.; his daughters, Roxanne Terhune, and her husband Terry of Indiana, Jannette Savoie; his sister, Sylvia Baker of ME; sister-in-law, Beverly Michelson of Westminster; grandchildren, Amy Griffith, Kevin Ouellette II, Christina Rochon, Gregory and Josh Terhune, Marco Martinez, Angela Christensen, Chris, Brian, and Timothy Palmer; great-grandchildren, Ryan and Eric Bombard, Felicia Lorette, Kevin Ouellette III, Amberly Ouellette, Aiden, Liam, Ronan and Evelyn Martinez; Lily and Bishop Christensen. Frank’s services will be held by his family at a later date. Arrangements are under the direction of Isabelle & Anderson Funeral Home, 316 Clarendon Street, Fitchburg, MA. For additional information or to place an online condolence, please visit www.andersonfuneral.com.

FITCHBURG - Frank A. Michelson, 84 of Fitchburg, passed away surrounded by his family on Friday, December 10, 2021. Born and raised in Fitzwilliam, NH on March 26, 1937, Frank was one of five children, born to the late Walter L. and Selma... View Obituary & Service Information

The family of Frank A. Michelson created this Life Tributes page to make it easy to share your memories.

FITCHBURG - Frank A. Michelson, 84 of Fitchburg, passed away...

Send flowers to the Michelson family.