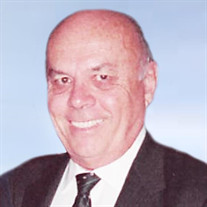 FITCHBURG-Francis N. Lessard, 89, of Fitchburg, was stricken ill and passed away on Saturday October 5 at the Highlands in Fitchburg. Franny was born in Worcester on November 8, 1929, the son of the late Edmond and Blanche Lessard and later moved to Fitchburg. Franny was the founder of Crystal Cleaners in Fitchburg which opened in 1951 where he had the reputation that, “No one cleans like Crystal Cleans”. He was drafted into the United States Marine Corp. 2nd battalion 6th Marines in 1953. Serving his country during the Korean war in Europe and aboard the USS Monrovia in the Mediterranean Sea where he attained the rank of Corporal. Franny was a lifetime member of the American Legion Post 429. He was a member of numerous clubs including the Knights of Columbus 3rd degree, Retired Men's Club, American Friendship Club, St. Joseph's Club, New England Fabricare Association, Past President and member of the Cleghorn Businessmen’s Association. He served on the board of the Fitchburg Wastewater Commission, Fitchburg Senior center and held 3 terms as President of St. Joseph's PTA. It was during this tenure that he was responsible for the installation of a commercial kitchen in the newly remodeled church hall, an accomplishment for which he was most proud. He enjoyed playing golf and was a member of Westminster Country Club, achieving every golfer dream of getting a hole in one. He was a fan of many Boston sports teams especially the Red Sox, Patriots and Celtics but he enjoyed watching his children and grandchildren playing their sports even more. Franny enjoyed life and loved to laugh and make others laugh with him whether it was on stage during St. Joseph variety shows or just sitting around the table. The family would like to thank the staff and residents of The Manor on the Hill where he resided the last two years for their love and support. He enjoyed sitting in on board meetings there just to make sure everything was properly taken care of. The family is also thankful for the wonderful care he received from Dr. Glaser and the staff at Health Alliance Leominster, the Highlands and Beacon Hospice. He was predeceased by his wife Mildred (Ryll) Lessard whom they shared 55 wonderful years of married life Franny and Millie enjoyed traveling the country and spending winters in Delray Beach Florida. He was Millie's care giver when she became ill attending to her every need. He is survived by his two sons and daughter, Michael Lessard and his wife Jill, Mary Jane Clark and her husband Mark, Martin Lessard and his wife Jacqueline. He is also survived by his grandchildren Christopher DiConza and his partner Jacqui Quinn, Cassandra Carkin and her husband Steve, Benjamin and Jeremy Lessard, Melissa Handy and her husband Kyle and seven great grandchildren. His funeral Mass will be celebrated on Friday, October 11, at 10 AM in St. Joseph’s Church, 49 Woodland St., Fitchburg. Burial will be in the parish cemetery. Calling hours will be held on Thursday, October 10, from 4 to 7 PM in the Isabelle and Anderson Funeral Home, 316 Clarendon St., Fitchburg. In lieu of flowers memorial contributions may be made to the St. Jude Children’s Hospital, 501 St. Jude Place, Memphis, TN 38105.

FITCHBURG-Francis N. Lessard, 89, of Fitchburg, was stricken ill and passed away on Saturday October 5 at the Highlands in Fitchburg. Franny was born in Worcester on November 8, 1929, the son of the late Edmond and Blanche Lessard and later... View Obituary & Service Information

The family of Francis N. Lessard created this Life Tributes page to make it easy to share your memories.

Send flowers to the Lessard family.