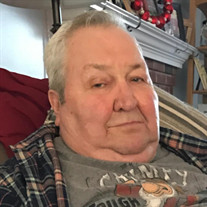 SHIRLEY : Francis H. Gionet,78, of Shirley, died Saturday, February 29, 2020 at Care Dimensions Hospice House, Lincoln. Mr. Gionet was born in Clinton, November 6, 1941, a son of Henry J. and Arlene E. (Gardner) Gionet and was a lifelong Shirley resident. He was a graduate of Ayer High School. During the Vietnam era, Mr. Gionet served his country for three years in the United States Navy. He was a member of the Shirley American Legion. He enjoyed family trips to York Beach, Maine and Disneyworld, Florida as well as deep sea fishing and attending his grandchildren’s games. Mr. Gionet had worked at the Norton Company in Worcester, Sampson Cordage in Shirley and most recently VeryFine Company in Littleton. He leaves two sons, John H. Gionet and his wife, Renee of Leominster, Francis M. Gionet and his wife, Danialle of Virginia; a sister and brother in law, Marcia Gardner and her husband, Richard of Leominster and four grandchildren, Kyle Gionet, Brett Gionet, Hannah Gionet and Aidan Gionet. In 2017 he was predeceased by his former wife, Carol Ann (Maskiewicz) Gionet. He was also the brother of the late Vandy Tolsen of Shirley. A funeral Mass will be celebrated 10 AM Wednesday, March 4, 2020 at St. Anthony’s Church, 14 Phoenix Street, Shirley. Mr. Gionet’s family will receive family and friends on Tuesday from 4-7 PM AM at the Anderson Funeral Home, 25 Fitchburg Rd., (Rte 2A) Ayer. For additional information or to leave an on line condolence, please visit their website at www.andersonfuneral.com.

The family of Francis H. Gionet created this Life Tributes page to make it easy to share your memories.

Send flowers to the Gionet family.