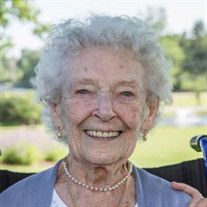 Florence was born in 1927 in West Boylston, MA, daughter of Albert F. and Emily (Lancisi) Zickell. She attended Leominster schools in Massachusetts, graduating with the Class of 1945. Florence and Russell R. Cook, Sr. were married in December 1949. They settled in Greenville, NH in the home they built themselves. Here, they raised their three children. Their children and grandchildren have been endlessly thankful for Florence’s endearing love, patience, and guidance. Florence was happiest surrounded by her family and friends, and was often the life of the party. Everyone was family to Florence. She was “Mom Cook” and “Grandma Cookie” to many more than just her family. She took great delight in attending recitals, plays, programs, and games over the years, always cheering all the "kids" on. Florence could often be found behind a crossword puzzle, with her nose in a book, camping in the Airstream, entertaining her grandkids, and traveling with Russ and family. She had many culinary specialties, but was best known for her baked beans, hot fudge, and mustard. In addition to raising her family, Florence was central to the formation and growth of Russ Cook Tours. For forty years, she was in charge of all office operations and worked side by side with Russ. Florence was known for her abundant generosity. She volunteered for over twenty years at St. Joseph’s Hospital. As proud a member of the “Greatest Generation,” the needs of veterans were near and dear to her heart. She knit countless baby hats, slipper socks, and prayer shawls that were donated to local charities. Florence had just completed a beautiful sweater set for the joyous occasion of her first great-grandchild, arriving in June. Florence will be remembered for her love of family, positive and loving outlook, and self-reliance. Most will remember her as a great listener, confidant, and loving friend. Florence was pre-deceased by her husband of 63 years, Russell R. Cook, Sr., her son Russell R. Cook, Jr., her son-in-law, Peter A. Michaud, her sisters Mary Lacilla, Eleanor F. O’Malley, and Ida M. Clements. Florence is survived by her children, Robin Michaud of Center Harbor, Francis and Constance Cook of Greenville, and her dearest Kate Thomsen of Pennington, NJ. She is survived by her four grandchildren, Gregory Michaud and his wife Megan, Katelyn Michaud and her husband Benjamin, Zachary Cook and his significant other Samantha Sinclair, and Christopher Cook. Florence also leaves her special nieces, nephews, and many, many friends who she considered members of her ever-expanding extended family.

Florence was born in 1927 in West Boylston, MA, daughter of Albert F. and Emily (Lancisi) Zickell. She attended Leominster schools in Massachusetts, graduating with the Class of 1945. Florence and Russell R. Cook, Sr. were married in December... View Obituary & Service Information

The family of Florence Ruth (Zickell) Cook created this Life Tributes page to make it easy to share your memories.

Florence was born in 1927 in West Boylston, MA, daughter of Albert...

Send flowers to the Cook family.