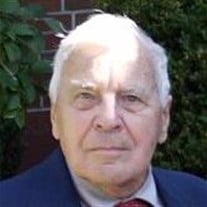 Eugene M. Caron, 98 Fitchburg- Eugene M. Caron, 98, a lifelong Fitchburg resident, passed away Saturday December 22, 2018 at Oakdale Rehabilitation & Skilled Nursing Center in West Boylston after a brief illness. Eugene leaves two sons, William P. "Pete" Caron and his wife Donna of Princeton, James Caron of North Carolina; one grandson, Jeffrey Caron; two grand-daughters Melissa Caron Ghiringhelli and her husband, Marty, of Hingham, Tracy Caron and her husband Robert Ward of Westminster and five great grandchildren. He is survived by four brothers; Gerard, Laurence, Louie and Leo Caron and two sisters; Mariette Brisebois and Carmen Housman. Eugene is predeceased by siblings Evette, Henry, and Paul Caron. In addition to his loving wife of 48 years, Dorothy (Lenois) Caron who died in 1992, Eugene is predeceased by his second wife of 17 years, Lillian (Cormier) Caron. Eugene was born on January 16, 1920 at his family home on Causeway Street in Fitchburg. He was the first born son of Henry and Olivine (Gaudet) Caron. Eugene was a 1938 graduate of St. Bernard’s High School. He began his career a machinist in 1940 and retired in 1985 after 36 years of employment at the American Can Company. He was a veteran of World War II, serving as a Seaman in the US Merchant Marines from 1943-1946. Eugene was a lifelong member of St. Joseph’s Parish in Fitchburg and continued to volunteer his time as a member of the “over the hill gang” completing weekly repairs. His biggest hobby was traveling. Over the years, Eugene visited 49 states (all except Alaska) and various different countries. He enjoyed reading, working in his garden and around his house, walking, and was always available to help out his son and grandchildren. To his family and friends, he was known as a “Jack of all Trades” as he was a keen repairman and there wasn’t a project that was too big or too small. Eugene’s funeral will be held on Thursday December 27th, 2018, at. St. Joseph's Church, 49 Woodland St., Fitchburg. Calling hours will be Thursday from 9:30 - 10:30 AM at the Isabelle & Anderson Funeral Home, 316 Clarendon St. Fitchburg. Please see www.andersonfuneral.com for additional information or to leave an on line condolence. In lieu of flowers, donations may be made to the Leominster Veterans Memorial Center, 100 West St, Leominster, MA 01453. The Caron family would like to thank the staff of Oakdale Rehabilitation & Skilled Nursing Center and the Manor on the Hill for their kindness and care.

The family of Eugene M. Caron created this Life Tributes page to make it easy to share your memories.

Send flowers to the Caron family.