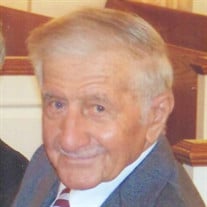 SHIRLEY: Ernest A. Blasetti, 102, a lifelong resident of Ayer & Shirley died peacefully Thursday morning, March 21, 2019 at his home. He was recognized at the Eldest Citizen of the Community and was the current holder of the Town of Ayer’s Boston Post Cane. Mr. Blasetti was born in Ayer, August 7, 1916, a son of Enrico and Maria (Fracassi) Blasetti and was a 1934 graduate of Ayer High School. Following his graduation from high school, Mr. Blasetti enlisted in and served as a Seabee in the United States Navy during WW II. He was a member of the Ayer American Legion Post and in February of this year was recognized for his military service at the Devens Memorial Museum where he was presented with The Quilt of Valor. For over 30 years, Mr. Blasetti worked as a bus driver at the F&L Railway System in Fitchburg, retiring in 1981. Mr. Blasetti leaves four daughters, Tam Blasetti of West Hartford, CT, Cala Claret of Winchendon, Tina Lawton of Saco, Maine, Joanna Bowolick of Shirley; his sister, Lina Guilfoil of Ayer; his longtime great friend and loving companion, Alice Langford of Shirley; eight grandchildren and eleven great grandchildren. He was the brother of the late Robert Blasetti, Joseph Blasetti, Gerard “Aldo” Blasetti, Mary Rydowski and Ernestine Jones all of Ayer. He was a member of St. Mary’s Church in Ayer and was an avid Red Sox fan. He enjoyed working in his garden, riding his bike and fishing. A funeral mass will be celebrated 10 Am Tuesday, March 26, 2019 at St. Mary’s Church, 31 Shirley Street, Ayer. Burial will be in the parish cemetery. Calling hours are 4-7 Monday March 25th at the Anderson funeral Home, 25 Fitchburg Rd., Ayer. Please see www.andersonfuneral.com for additional information to leave an on line condolence.

SHIRLEY: Ernest A. Blasetti, 102, a lifelong resident of Ayer & Shirley died peacefully Thursday morning, March 21, 2019 at his home. He was recognized at the Eldest Citizen of the Community and was the current holder of the Town of Ayer&#8217;s... View Obituary & Service Information

The family of Ernest A. Blasetti created this Life Tributes page to make it easy to share your memories.

SHIRLEY: Ernest A. Blasetti, 102, a lifelong resident of Ayer...

Send flowers to the Blasetti family.