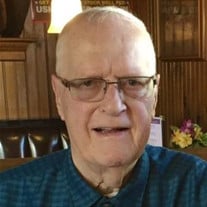 HARVARD - Eldon M. Strickland, Jr., 82, of Harvard, died Thursday morning, January 23, 2020, in his daughter’s home in Parma, Michigan. He was born in West Roxbury, on July 3, 1937, a son of the late Eldon M. and Madeline (Krueger) Strickland and has resided in Harvard over sixty years. He attended Bromfield High School at Harvard and later graduated from Leominster High School, where he met his wife, Patricia. Eldon served as an auxiliary policeman for the Town of Harvard Police Department and was their first full time police officer. He was a member of the Ayer, Harvard, Shirley & Devens Rotary Club, and a Past President (1978-79) as well as having perfect attendance for over 30 years. Eldon was a member of the Nashoba Valley Chamber of Commerce and a past President of its predecessor in 1980. He received the Albin Jodka award in 1997. An active Mason Eldon was initiated into Caleb Butler Lodge on January 13, 1959. He was passed on February 9, 1959, raised to Master Mason Degree on March 24, 1959, acted as the Master of Caleb Butler Lodge from 1964 to 1965, served as Lodge Treasurer from 1993 to 2012, and was Assistant Treasurer from 2012 to 2016. In addition to Caleb Butler Lodge, Eldon was affiliated with St. Paul Lodge in Gardner, MA, from 1976 until his passing, and he was affiliated with Tahatawan Lodge in Littleton, MA, from 1983 to 1992. He was also a member of the Shriners. He received the Joseph Warren Distinguished Service Medal in 1999 in recognition of his many years of service to freemasonry. Eldon also received a Veterans Medal in 2009 in recognition of his 50th year as a Mason and a Certificate in 2015 in recognition of his 50 years as a Past Master of the lodge. For nearly forty years, Eldon owned and operated Ayer Moving and Storage Company in Ayer, retiring in 2011. Eldon leaves his wife of 60 years, Patricia (Stockwell) Strickland of Harvard and his five children and their spouses: Karen Strickland Sampson and her husband David, of Dunstable, MA; Cheryl Houle and her husband Brian, of Hubbardston, MA; Drs. Eldon Strickland, III and his husband, Libor of Watertown, MA; Holly Rossner and her husband Albert III, of Parma, MI; and Philip Strickland and his wife Amy, of Lunenburg, MA. He also leaves his 11 grandchildren: David Sampson, Jr., Ashley Sampson, Stephanie Tremblay, Michael Houle, Stephen Houle, Albert Rossner, IV., Heather Curtis, Hannah Rossner, Hope Rossner, Shaun Hart, and Grace Strickland as well as 11 great-grandchildren along with many nieces and nephews. Eldon is predeceased by his brother Ronald Strickland of Harvard, who died in 1996 and leaves his surviving sisters: Maria, Gloria, Doris, and Carol. Calling hours will be held on Monday, February 3, 2020, from 4 to 7 PM in the Anderson Funeral Home, 25 Fitchburg Rd., (Rte. 2A), Ayer, MA. His funeral service will be held on Tuesday, February 4, 2020, at 11 AM in St. Andrew’s Episcopal Church, 7 Faulkner Street, Ayer. Burial will follow in the Bellevue Cemetery in Harvard. For further information or to leave an online condolence, please visit their website at www.andersonfuneral.com. In lieu of flowers, memorial contributions may be made to Ayer Rotary Club, PO Box 239, Ayer, MA 01432, Caleb Butler Lodge AF & AM, 11 Sculley Road, Ayer, MA 01432, or the Shriners Hospitals for Children (https://lovetotherescue.org/)

The family of Eldon M. Strickland Jr. created this Life Tributes page to make it easy to share your memories.

Send flowers to the Strickland family.