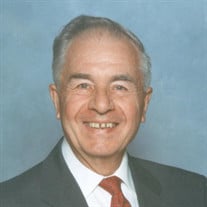 AYER: Edwin J. Bloom, Jr., 90, of Ayer, formerly of Concord, died Wednesday, April 27, 2022, at Lahey Clinic, Burlington, MA shortly after a tragic car accident. He is now at peace and re-joined with his beloved wife of 51 years, Mary C. (Caciola) Bloom, who died January 1, 2008. Mr. Bloom is survived by his son, Edward J. Bloom of Maynard; three daughters, Mary C. Bloom of Houston, TX, Theresa A. Bloom – Hontas of West Pawlet, VT, Donna M. Bloom – Schaff of Pepperell; four grandchildren, Sgt. Duncan Schaff, Tyler Schaff, Angela Hontas and Samantha Hontas. Mr. Bloom was born in Yonkers, NY, November 12, 1931, the son of Edwin J. and Marion (Baude) Bloom with siblings Marion and Carole. He graduated from Charles E. Gorton HS as class Valedictorian in 1949. During the Korean Conflict, Mr. Bloom served his country for four years in the US Army in heavy field artillery, attaining the rank of Sergeant. During that time, he was stationed in Germany and Fort Jackson, SC. Following his honourable discharge from the armed forces, Mr. Bloom resumed his education at Cornell University in Ithaca, NY, where he received his B.S. degree in Industrial & Labor Relations in 1957. Mr. Bloom’s career in Human Resources is extensive. He was the Founder and President of Employee Relations Associates, Inc. in 1977 until his retirement in 1998. He held prior positions as VP & Director of Personnel for firms including Lechmere Sales in Cambridge, Zenith Radio in Chicago, Philco-Ford in Philadelphia and GAF Corporation in Binghamton, NY. He served as an adjunct professor of Personnel Management at Lasell Jr. College in Newton and Bunker Hill Community College in Charlestown. Mr. Bloom is listed in “Who’s Who in the East, “Who’s Who in Finance & Industry”, “Who’s Who in America” and “Who’s Who in the World”. He was awarded the Certificate of Merit from the Massachusetts United Way and from the Massachusetts Department of Mental Health. In January 2018 Mr. Bloom was recognized for his commitment as a volunteer and supporter to the Indian Hill Music Center. He was a regular communicant at St. Theresa the Little Flower Church in Harvard. He was a member of the Ayer American Legion and had served as their Chaplain. He was a member and past president of the Ayer Council on Aging and volunteered at the Minuteman ARC for Human Services. He served as a corporator at Middlesex Bank in Concord. As an advocate to the Mental Health Community, he served as a board member to the Massachusetts Department of Mental Health Concord Area, Massachusetts Department of Mental Retardation, Eliot Corporator and member of the Board of Directors and Executive Board to the Community Mental Health Center in Concord. A Funeral Mass will be celebrated 10 AM Friday, May 6, 2022, at St. Theresa the Little Flower Church, 15 Still River Road, Harvard, MA with interment at Winchendon Veteran Memorial Cemetery. Memorial Contributions may be made to Holy Trinity Parish Awards Program, c/o Holy Trinity Catholic Parish, P.O. Box 746, Harvard, MA 01451. The Anderson Funeral Home, Ayer, MA is assisting the family with arrangements. For additional information, or to leave an online condolence, please visit their website at: www.andersonfuneral.com

The family of Edwin J. Bloom Jr. created this Life Tributes page to make it easy to share your memories.

Send flowers to the Bloom family.