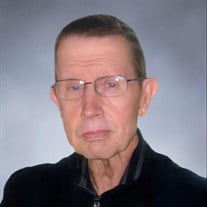 AYER; Edward C. Bergan, Jr., 86, the beloved husband of Karen S. Bergan passed away on April 5, 2022. Ed was born on March 8, 1936 in Erie, Pennsylvania to Edward C. Bergan, Sr. and Evangeline (O'Mahony) Bergan. He lived his early life in western Pennsylvania, earning engineering degrees from Carnegie Mellon University and after moving to Massachusetts from Northeastern University. Over the course of his engineering career he was employed by several corporations, and retired in 2001 after 23 years service with Carlisle, Massachusetts based Assurance Technology Corporation. Ed Contributed to many important DOD and NASA programs that included the Apollo Guidance and Navigation Computer, the Viking Mars Lander Camara, the Patriot Missile Program and the International Space Station. He also provided consulting services to the Becton Dickinson Corporation in their development of an insulin pump in Switzerland. Ed enjoyed reading, and among his favorite authors were David Halberstam, John D Macdonald, Lawrence Block, William L Shirer, and Jon Kabat-Zinn. He also enjoyed photography, listening to classical music, vacationing in Bar Harbor, Maine, bicycling especially while riding with the Adventurides group of Groton, Massachusetts , volunteering at the Loaves and Fishes Food Pantry, caring for the various cat and dog companions in his life, the several Caribbean Cruises with Karen, and the many visits with his large extended family. In addition to his dear wife, his survivors include two children, a daughter Robin Latto and her husband Eric of Chandler, Arizona, a son, David Bergan and his wife Christina of San Diego, He was the brother of the late Thomas Bergan, Anna Marie (Bergan) Teed, and Richard Bergan. He also leaves behind 3 step daughters: Sharon LeMay and Cathy Drescher residing in Ayer, Massachusetts and Sandy Drescher of Tehachapi, California. He was the grandfather of 5 grandchildren and 3 step grandchildren. He also will be missed by a multitude of first and second cousins. Mr. Bergan's family will receive relatives and friends at calling hours Sunday, April 10, 2022 from 2-4 PM at the Anderson Funeral Home, 25 Fitchburg Road, (Rte 2A) Ayer. For additional; information or to leave an online condolence please visit their website at www.andersonfuneral.com. Funeral services will be held 11 AM Monday, April 11, 2022 in the funeral home. Interment will follow at Westlawn Cemetery, Littleton.

The family of Edward C. Bergan, Jr. created this Life Tributes page to make it easy to share your memories.

Send flowers to the Bergan, family.